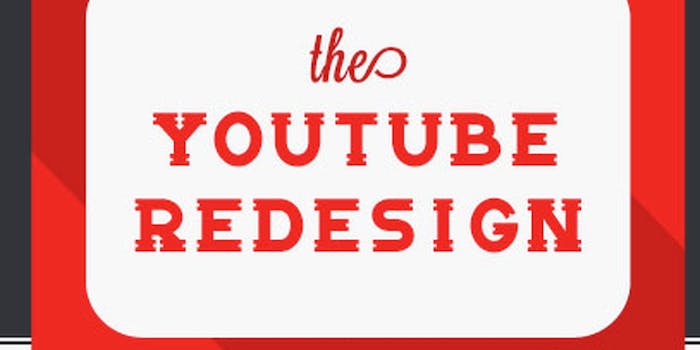 On Dec. 1, 2011, Google revamped YouTube’s homepage with a fresh new look. It wasn’t the first time the company had done such a thing, but it may have been the most pronounced.

The massive video-sharing site, which sees over 800 million unique users each month, was rebuilt to support a newfound emphasis on premium channels, created by conglomerates like the Above Average Network and My Damn Channel. YouTube had become, for all intents and purposes, a smaller iteration of TV.

But in doing so, the site left in its wake a massive number of YouTube partners who’d come to understand YouTubers’ habits and knew the best way to post content on the site. Those users had their routines—they knew what worked—and they liked things the way they were. Since the redesign, they’ve shown no reservations expressing their frustrations.

“The redesign, with the way the feed looks after you log in as Joe User, feels like our subscribers have a little bit of a harder time seeing where our latest work is,” Evan Gregory of YouTube songwriting troupe the Gregory Brothers told the Daily Dot in July.

“It seems like subscriptions hold less value than they did before the redesign. “That’s a tough thing to solve in terms of making sure that our fans realize what we’re putting out.”

Will Hyde, a YouTube staple whose daily Will of DC broadcast was a leading resource for YouTube news before he left for a job in social media marketing at Maker Studios, took Gregory’s suspicions one step further. He argued that valuing YouTube subscriptions should be considered archaic and irrelevant.

“It’s a dead mechanism,” he told the Daily Dot. “By and large, if we’re looking at the bigger picture of YouTube and how it operates, the subscription option is dead. It’s just dead. People are only getting 5 to 15 percent of their views from subscription boxes.”

To help visualize the effect the redesign had, the Daily Dot partnered with online video data analysts ChannelMeter. We looked at eight of YouTube’s biggest stars, comparing their subscriber and view counts before and after the redesign went into effect. What we found was that times have not been easy for those who make up YouTube’s original pride and joy.

In fact, for some, the situation’s gotten a whole lot worse.