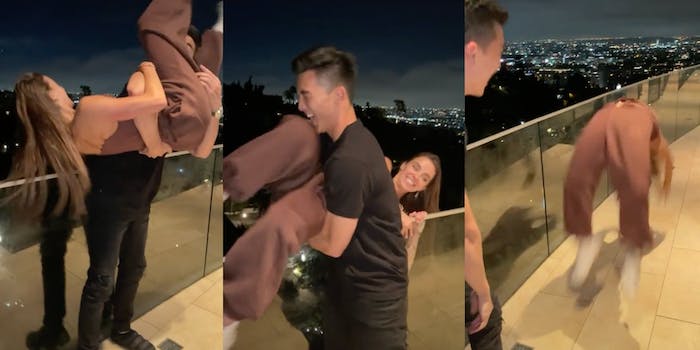 'If my friends ever did that, I’m cutting them off immediately'

A viral TikTok showing a man dangling a woman over a balcony at what appears to be an influencer party in Los Angeles is being criticized online.

The video, posted by The Bachelor alum Brittany Galvin who goes by @lilgalvin on the app, has garnered 7 million views in a single day. A man and woman can be seen, appearing to joke around. The man picks up the woman, flips her over his shoulder—hitting her head on the parapet—and dangles her over a balcony. Gasps and yelps can be heard in the background. The woman smiles as she grabs hold of the parapet before being brought back to safety. Once she gets back on her feet, she does a backflip while the other partygoers stare.

“What is going on?” Galvin says behind the camera.

Viewers had the same question, with one comment calling the video a “fever dream.” Many wondered why the man in the video would risk the woman’s life for a joke.

“I would never be friends with them again,” one person said. “Risking my life like that.”

“If my friends ever did that I’m cutting them off immediately,” another wrote.

“No cause her life was in his hands and so was his,” a comment read. “If he dropped her she would’ve died and he would be a murderer.”

Many commenters thought the stunt was a party trick turned foul, saying that it’s “not worth it.”

“Seems like she was trying to impress the crowd,” one user stated. “Wasn’t worth it at all.

“[The] way I would’ve left [the] party just being around behavior like that,” another said.

But one question still remains for viewers, put succinctly by one comment: “What was the reason for the backflip?”

“I think she’s just happy he didn’t drop her,” one person theorized.

The Daily Dot reached out to Galvin.