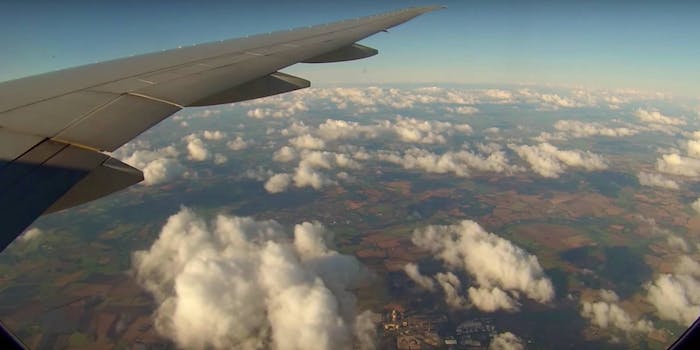 Around the world with Inflight Video, YouTube’s most soothing aviation channel

Who knew air travel could be so relaxing?

Once upon a time, YouTube came with pretty strict video length requirements. In 2006 you couldn’t upload anything longer than 10 minutes.

To put that into perspective, that’s just long enough for Guns ‘N Roses’ “November Rain” video. Of course, now you can find full-length movies and records lurking in the service’s bowels, but I don’t think anyone takes advantage of that newfound creative liberty quite like the man behind Inflight Video.

As its name implies, Inflight Video uploads full length footage from the interior of commercial airliners. He doesn’t pull any punches either; the channel hosts all nine hours of, say, this trip from Dublin to Philadelphia. It’s certainly not the most conventional craft on the internet, but I do find something a little bit relaxing in the oddness.

Air travel sucks. You’re cramped, you’re in a rush, you make unsatisfying bathroom trips—but on Inflight Video, you get to experience the best parts of air travel from the comfort of your own bed. We caught up with Inflight Video’s creator, to learn how and why he spends a significant portion of his life documenting the most benign part of traveling for his audience.

When did you first discover your love of flying?

I took my first flight aged 11 in 1992. We did a school exchange visit to Moscow, Russia, and I’d never been on an aircraft in my life! I was really scared when we took off but by the time we arrived in Moscow and I’d explored every inch of the brand new Boeing 767, and visited the flight deck, I was hooked!

When did you start filming your trips? What was the motivation behind that?

I started filming my flights back in around 2003 and when I got a digital camera in around 2005. I started uploading the takeoff and landing videos to YouTube in around 2009, primarily as a storage platform. I used to write trip reports for the aviation website airliners.net and just used YouTube to store my (very poor quality) videos and add a little more to my trip reports. I made my first feature length flight film in 2013 when I went to Australia with Emirates, and had a couple of weeks to put together a really nice video, which went absolutely crazy on YouTube! I eventually started filming shorter flights in full length, which started to be popular, so I gradually made longer and longer videos.

When I was a young “avgeek” in the 1990s we didn’t have the internet, let alone YouTube, so my aviation fix came from buying Just Planes videos. I would have loved to have been able to [watch] full flights from a passenger perspective in real time to get my aviation fix, as I couldn’t afford to fly and my family never took holidays abroad. Now I’m in the fortunate position to be able to fly more regularly. I enjoy being able to share the fun of flying with people around the world so that they may be able to enjoy the experience of flight without having to set foot on an aircraft.

Did you watch any other similar channels on YouTube before creating your own?

I got my inspiration for making full length flight videos from watching other channels such as World Aviation HD. It just fascinated me that I could put a full flight on and just choose the parts that I wanted to watch, or even just put a flight on in the background and ‘virtually’ fly anywhere that took my fancy, in real time!

How often do you travel? How do you film your videos?

I take a filming trip once every 1-2 months. A typical trip will include four or five flights, for example a recent trip I took involved flying from Manchester, UK, to Zurich, Switzerland, on to Luxembourg and finally Dusseldorf before flying back home to Manchester. That was around a 12 hour trip to end up right back where I started!

Another trip involved me flying from London to Oslo in the morning, flying back to London in time for lunch, connecting on to New York JFK in the afternoon, and the following morning taking a flight to Los Angeles and the evening flight back to London, with a total trip time of 48 hours away from home to film five flights, three of which were long haul.

I film my videos using a GoPro Hero4 attached to the window of the aircraft with a suction mount, powered by either the aircraft’s USB power or a USB battery pack. This gives me up to 36 hours of footage if I get no other power. For the airport footage and cabin views on the aircraft, I use a GoPro Hero Session or sometimes just my iPhone. Storage wise, I use 128GB MicroSD cards in the GoPros, which give up to nine hours of footage per card, so on longer flights I may use two cards.

Do all the videos on your channel come from you or do you upload other people’s videos as well?

All of the videos on my channel are my own videos. I’ve filmed them all myself!

I have several groups of people who seem to enjoy my videos. I would say aviation enthusiasts make up around 50 percent of my viewers. The rest use my videos for a combination of reasons, primarily for relaxation and sleep therapy.

Another group of viewers are those that have a fear of flying, and whilst setting foot on an aircraft may fill them with fear, when they are in control of the video and on terra firma they can experience the entire flight and learn the sights and sounds of an aircraft, without ever leaving the ground.

Finally there are viewers that love flying, but for one reason or another cannot do so, for example if they have health issues. I’ve had quite a few people message me to say thank you for filling their desire of flight, as they are too ill to fly and by watching my videos find they can experience their passion through video at least!

My favorite video so far was the flight I took from New York to Los Angeles. This was a 6 hour flight on a beautifully clear Sunday morning for the entire flight, during which we got fantastic views of the entire USA from coast to coast.

From the farmland of the northeast, across the Great Lakes to the Midwest, across the open ranges of Iowa and Nebraska, the ground gradually turning browner until we hit Denver and the Rockies. We then got clear views of the entire width of the Rockies, across the deserts of Utah and Nevada, before hitting the sprawling metropolis of Los Angeles.

To top it off, we had to do a ‘go around’ due to an aircraft on the runway, so we were treated to the excitement of that and then a scenic tour of the whole of Los Angeles on a beautiful clear morning! This was by far my favorite flight I’ve ever taken, and I still watch that video back regularly!