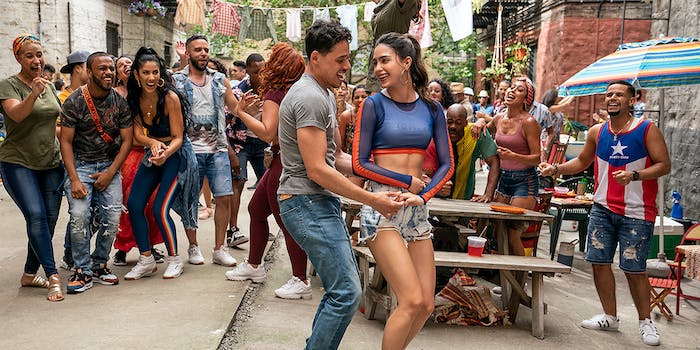 Viewers are criticizing ‘In the Heights’ for ‘white-washing’ cast, erasing Afro-Latinx people from Washington Heights

Beyond its tepid commercial response, additional criticism has come from viewers who believe the cast was not representative of its setting.

In the Heights, the Anthony Ramos-starred critically-acclaimed film adaptation of Lin-Manuel Miranda’s Broadway musical, surprisingly disappointed in its initial box office tallies, blown out by third-week returns of A Quiet Place Part II. Beyond its tepid commercial response, additional talk and criticism have come from many viewers who believe the cast was not representative of its setting, Washington Heights, especially Afro-Latinxs. Some have even accused producers and director Jon M. Chu of colorism and white-washing the cast, which features largely lighter-skinned Latinx actors.

In a video made by news outlet, The Root, titled “‘In the Heights’ and the Erasure of Dark-Skinned Afro-Latinxs,” The Root producer Felice León directly challenged Chu on the lack of representation.

León, a “Black woman of Cuban descent specifically from New York City,” noted that the cast was mostly “light-skinned or white-passing Latinx people.”

Chu said it was discussed and that colorism was “something [he] needed to be educated about, of course.” But he says they essentially decided to select actors that were “best” for the roles. He mentioned the Black representation in the magnificent dancing numbers; however, Leon duly noted that background dancing in films is always a role that Black people (Latinx or non-Latinx) “have been able to fill.”

“A lead, that’s the breakthrough,” said León in the interview. “We want to see Black people in the Heights. We want to see Afro-Panamanians, Black Cubans, Black Dominicans.”

In the video, Mexican actress and telenovela star Melissa Barrera shared that there were a lot of Afro-Latinx people who auditioned, but she thought “they were looking for just the right people for the roles.” Some viewers believed that Barrera was defending colorism.

Rapper Chika wrote in a tweet: “ooooh, shit. this is messy. a lotta white latinx people saying, “we were just better than the darker options. all of us. coincidentally.”

Actress and director Numa Perrier also noted that the casting team appears to have consisted of two white people.

@haitianking96 reached out to Barrera, who didn’t exactly change her stance.

She even suggests that the film’s success would boost the representation of Black Latinxs in film, saying its commercial success would “open many more doors to tell all the stories that the Latinx and Afro-Latinx community deserve.”

@95LouieG posted a video showing scores of Afro-Latinxs in Washington Heights, followed by the almost-entirely light-skinned or white-passing cast rundown.

In a TikTok, user @thickblackthot appears to have caught editors copying and pasting Black people throughout a large pool scene and blotting out Haiti when showing the Dominican Republic on a map.

Other viewers noticed the scheme.

In a thread, Carmen Phillips wrote: “Dark-skinned Afro-Latinx actors are put into boxes where they can’t even audition for Latinx roles. I’m so proud of being Black, but that doesn’t mean it doesn’t hurt when we are literally written out of the narrative of our own communities’ stories b/c we aren’t in the room.”

Additionally, she believes, “the decision to cut the plot of Nina’s dad being anti-Black from the play and the online conversations about colorism in the movie are of the same coin; In the Heights had an opportunity to say something important about race in our communities and it didn’t. Flat out.”

Barrera and many others believed the sheer fact that In the Heights made it to the screen could be a victory of sorts, which could be true. However, given the lack of commercial box office success out of the gate, one could also figure inclusion of darker-skinned Black faces should have been the way forward, as appeasing white producers and ticket buyers was clearly not.