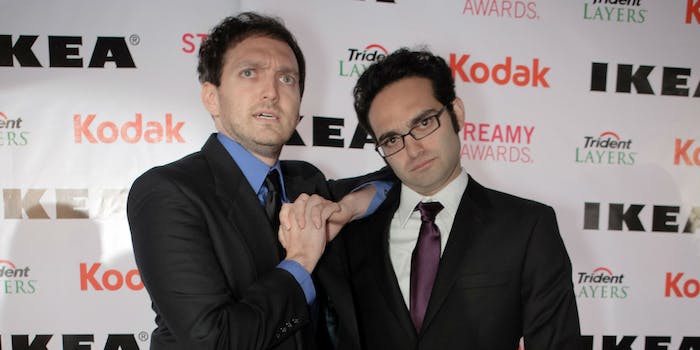 YouTube creator Hank Green posted a piece on Medium on Sunday night about the Fine Bros.​ and the ongoing kerfuffle about their “ownership” of React. Hank updated his piece overnight, but it still both oversimplifies and overcomplicates trademark law in the way not uncommon to most intelligent people who haven’t practiced trademark law for years (i.e. the analogy to Burger King is great and the note that trademark law isn’t the same as copyright law is an important one but the distinction between descriptive and generic marks is skirted over, even though it could impact what rights the Fine Bros. own).

However, I’ve been practicing trademark law since the 1990s, so I wanted to (to paraphrase Hamilton) get in the weeds, look for the seeds of the Fine Brothers’ misdeeds—or, more possibly, the absolute incomprehension of YouTube by their lawyers. 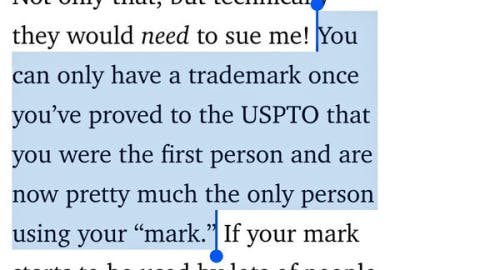 Someone told Hank this at some point, but it’s not accurate.

Trademark rights in the United States are accrued by use, not by registration. Absent some very limited exceptions, a person/business/nonprofit/team/organization/family (hereinafter “Entity”) starts to develop rights in a trademark as soon as they start to use it (commercially, which is defined very broadly), but when the word is not a coined term, those rights are tied directly to the types of goods or services or serieses (hereinafter, “Stuff”) on which that mark is used.

The concern for the courts and the trademark office is Likelihood of Confusion, and there are tests to determine if a junior user is likely to be confused with a senior user. There are a lot of elements and tests that courts look to, including the overlap between the parties’ Stuff and their distribution channels, and even the number of similar marks in use on related Stuff.

PTO and court policy basically  states that if you’re using a dictionary word in connection with a filmed series or a book series, you have to specify the theme of the series—as The Fine Bros. did in their Patent and Trademark Office applications. 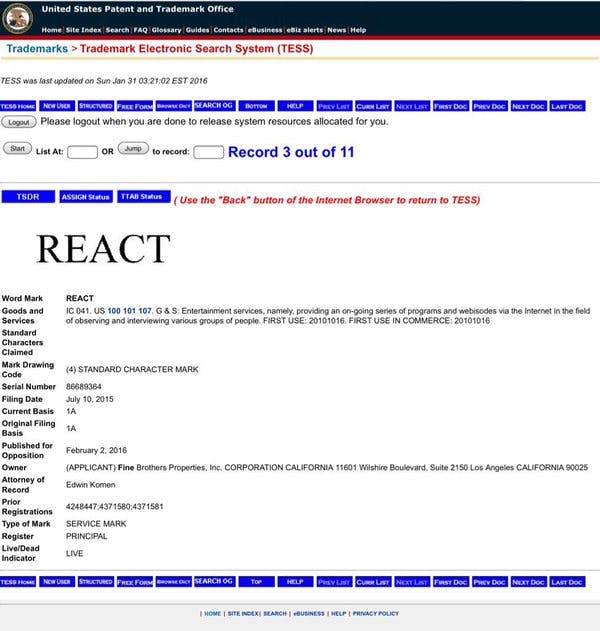 They already have registrations for three marks containing the term React, and a bunch more are publishing on Tuesday, which means that anyone can file a petition to oppose the registration, which an attorney has already said he plans to do, on the grounds that React is generic (though I hope he argues in the alternative that it’s descriptive of the Stuff).

Why does it matter whether React describes “a series of programs in the field of observing and interviewing various groups of people?”

Because the USPTO does not allow registrations of marks that are descriptive of the Stuff that they are used commercially with without a showing that the mark has acquired distinctiveness. The word “react” describes the content of the programs, if not the genus of the programs; they show people reacting to things.

A claim of acquired distinctiveness generally requires the claimant has been the sole and exclusive user of it, advertised it extensively, etc., because they have to show that “the primary significance of the term in the minds of the consuming public is not the product but the producer.” In other words, when people hear “a react video” do they think of the Fine Bros. and/or their designees, or do they think of any video where someone is reacting to something?

Even if they aren’t trying to prevent everyone from using the word “react”—and no, they don’t have the law on their side if that’s what they are trying to do—why did they put their pending applications at risk like this by shouting about it?

If you weren’t the senior user of it in the first place, and others have used it before you and while you’ve been using it, and it’s very descriptive, it takes a lot of effort to say that secondary meaning has attached to it in connection with that specific Stuff.

But not necessarily for all Stuff. Is React descriptive for candy? Nope, and it’s likely they’d be able to get and keep a registration for React in connection with candy, t-shirts, mouse pads, swords, and probably even cameras and microphones.

Is their distinctive React logo that they use on YouTube and elsewhere descriptive, design-wise, of the Stuff? Again, no—so they would probably be able to get and keep a trademark registration for the Design Mark React, as long as they stated to the PTO that they don’t claim exclusive rights to the word, just to the logo.

Those are neat ways to protect a brand that you’re building while not trying to restrict those who are using it descriptively or decoratively, or on unrelated goods and services. Start using it on merchandise like candy or shirts or stuffed microphones or camera-pillows, and protect the logo so people know that it’s MY THING unless it has that logo on it.

What puzzles me about this is, why did they suddenly announce their licensing project right before their current applications publish? As I noted above, anyone who believes they may be damaged by a registration—including anyone who may ever want to create a video of people reacting to things and use the term “react” in connection with it—can file to oppose a registration; you have to file papers with the PTO and there’s a fee, and the process can take over a year to move through the Trademark Trial and Appeal Board (TTAB), but if you win, the mark doesn’t register—which doesn’t mean they can’t use it because rights-by-use-not-registration—but it does prevent them from getting the benefits of registration.

Even if they aren’t trying to prevent everyone from using the word “react”—and no, they don’t have the law on their side if that’s what they are trying to do—why did they put their pending applications at risk like this by shouting about it? Is it because they can now claim secondary meaning more easily than they could in, say, September of 2015?

For what it’s worth, the marks that they have already registered, including KIDS REACT, TEENS REACT and ELDERS REACT, haven’t been registered for five years yet, and thus anyone who believes they may be damaged by the ongoing registration of those marks can petition the PTO to cancel those registrations on the grounds that the marks are descriptive of the Stuff; again, small fee, pleadings filed with PTO, will take over a year through the TTAB.

And that’s not even as significant as the hundreds of thousands of subscribers they’ve hemorrhaged over the last few days.

Will this situation make them rethink their licensing plans, and switch to protecting their Stuff by using their marks on merch?

We’ll see, and I am sure that we will react.

Heidi Tandy has practiced internet, media, and intellectual property law for 20 years. She serves on the lawyers’ committee for the Organization for Transformative Works, created fyeahcopyright.tumblr.com, and was a founder of FictionAlley.org. She has been quoted in TIME, Newsweek, the New York Times, the Wall Street Journal, and the Daily Dot, been part of the Harry Potter Fandom Panel at San Diego Comic Con since 2008, and presented at SXSW, DragonCon, PennLaw and Princeton. Follow her on Twitter @travelingheidi.

A version of this story originally appeared on isfanficlegal.com and has been reprinted with permission.