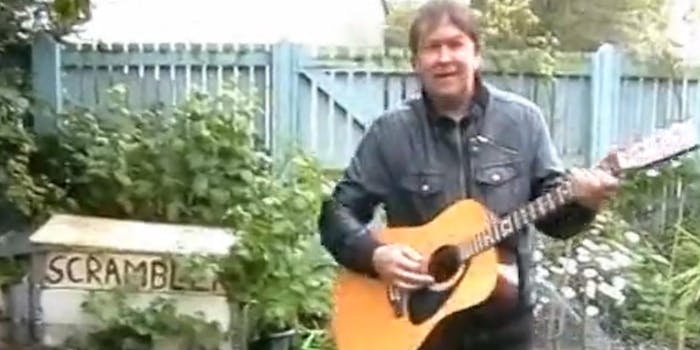 If you think your dad is embarrassing, watch this music video

Fact. Don't belive us? Just wait for the chickens.

Fact: Dads do strange things. For redditor ChalkUp, this sentiment is all too real. Today he posted a music video to Reddit originally made by his father 10 years ago.

According to the embarrassed son, his dad produced the clip for a friend, U.K. musician Ian Cavanagh. It’s a sight to behold: Cavanagh lightly strums an acoustic guitar to an Eagles-sounding tune he cowrote about a barmaid at a local pub who doesn’t love him back.

Hands down, the best thing about the video is its guest stars: two chickens who live in the backyard where Cavanagh plays. He bobs around the birds as his poorly lip-synched lyrics narrate his walk through the garden.

Cavanagh could never be called a one-hit wonder; his Soundcloud packs 10 tracks. Besides the handful of “I’m in Love With You”–style love songs, his catalogue is mainly gospel-inspired folk rock.

Ian, I have to let you know, I’m in love with you too.