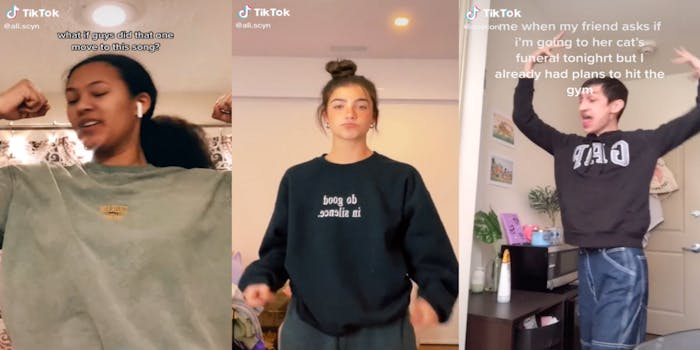 Everyone on TikTok is ‘getting ripped tonight’

'The voice inside my head while I'm getting a Brazilian.'

The song “Dick” by Doja Cat and StarBoi3 is spreading wildly on TikTok with lip-syncing and comedic interpretations in what’s known as the “I’m getting ripped tonight” trend.

The trend started when 16-year-old TikToker @ali.scyn posted a dance video on March 5 with the caption, “What if guys did that one move to this song?”

In the video, Ali crosses her arms and raises her head up toward the ceiling as she brings her hands back down. She flexes her biceps and follows with a series of figure-eight wrist rotations and chest pops.

The video has more than 600,000 videos and 140,000 likes, although the original audio has been removed due to copyright reasons.

Others on TikTok joined in on the dance trend, including influencer Charli D’Amelio who has almost 80 million followers.

In response to D’Amelio performing the dance, Ali made a video thanking everyone for hopping on the trend. “Thank you so much for doing my dance and I love and appreciate you,” she said in the video.

Others took the catchy lyrics to new creative heights and added humor on top of the dance.

In a video with the caption, “Me when a friend asks if I’m going to her cat’s funeral tonight but already had plans to hit the gym,” user @gaycon gives “R.I.P. that pussy” and “I’m getting ripped tonight” a whole new meaning.

Even outside TikTok, people have the lyrics stuck in their heads. From gym selfies and bikini waxes to finishing exams and hiking 12,000 feet up snowy mountains, tweets reflect that the lyrics fit any occasion.