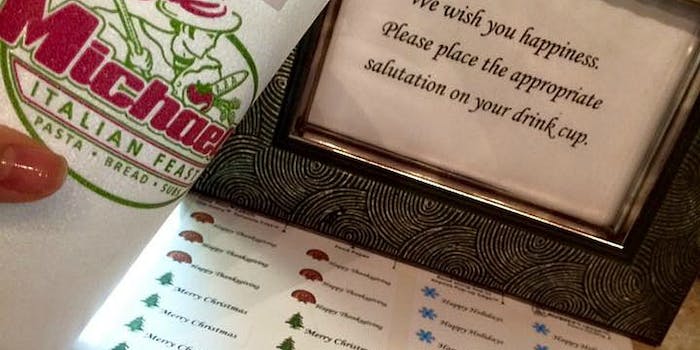 Here’s the perfect solution to the Starbucks holiday cup controversy

Arthur Fonzarelli would approve of this idea.

For some reason, some people are awfully upset at this year’s version of the Starbucks annual holiday cup where snowflakes and ornaments have been removed and where only a red cup with a green company logo remains. Even Weird Al is tired of the controversy.

Luckily, a small pizza chain in central Illinois has figured out the perfect solution. Make the holiday cup a completely democratic process. Pick your own cup’s greeting, and everybody shall be merry.

As one redditor commented, there appears to be an absence of Festivus stickers. Quite honestly, though, the Happy Days messages more than make up for it. And that is likely something with which all of us—no matter your opinion on the Starbucks issue—can agree.