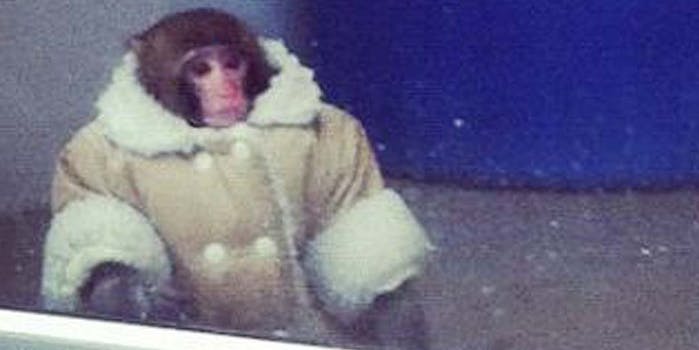 The IKEA Monkey is a little scamp named Darwin who showed up wearing an elegant winter coat in a Toronto-area IKEA last winter. But it’s not all memes and whimsy; Darwin’s handlers are in court right now for a trial against a primate sanctuary over who holds the rights to keep the monkey.

Reporter Laura Kane (@ellekane) of the Toronto Star has been livetweeting the trial on Twitter, and she’s just killing it. Take, for example, a gem like this:

Nakhuda: “I would never have given Darwin up. It’s inconceivable. He’s part of us. He’s one of us. Why would I give him away?” #ikeamonkey

Seems Nakhuda and her husband are getting very emotional about Darwin, crying on the stand when asked about signing him over.

Nakhuda’s husband Samar Katoch says they were “in a daze” after Darwin was seized, like “being struck with a car.” #ikeamonkey

Nakhuda sobbing as sanctuary’s lawyer questions her about signing surrender form. “I had to sign it. I had to see him again.” #IkeaMonkey

That little monkey certainly knows how to capture the human heartstrings. I’ll just be here, popcorn in hand, endlessly refreshing Kane’s Twitter page until this trial is over.