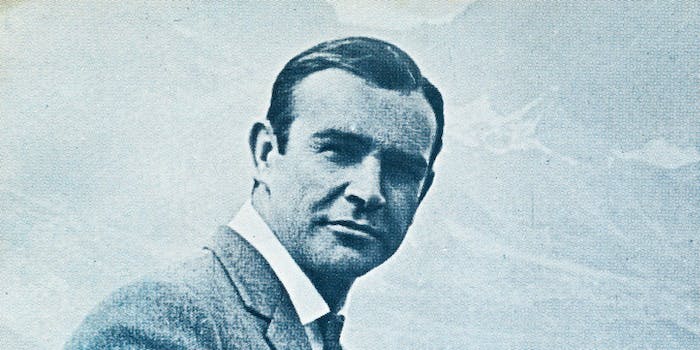 The real reason James Bond will never be black

Idris Elba won't be driving 007's Aston Martin anytime soon, and it's not because he's 'too street.'

What does it take to play James Bond? You have to be dashing and debonair, look great in a Tom Ford suit, and be able to shake the hell out of a martini.

However, there’s just one more requirement: You can’t be “too street.” According to Anthony Horowitz, the author of a new novel in the ongoing series of Bond novels, British actor Idris Elba—long a fan favorite to fill Daniel Craig’s shoes—is a “bit too rough to play the part.” In an interview with the U.K.’s Daily Mail, he argued, “It’s not a color issue. … Is it a question of being suave? Yeah.”

Horowitz quickly rolled back on his statement on Twitter, but these comments point out a fascinating and telling double standard when it comes to the conversation about the 007 film series’ first black Bond—as well as the way Hollywood treats people of color. When it comes to Idris Elba, looking like you could take a couple punches in a pub brawl isn’t a marketable quality. It’s just another barrier to entry—the ultimate indication of a system that sets black actors up to fail.

But for an actor like Daniel Craig, having a “street” vibe is an asset. Arguably, it was why Craig was hired to replace Pierce Brosnan, following a decade in which the property devolved into punny kitsch. When Daniel Craig took over for Brosnan for 2006’s James Bond reboot, Casino Royale, he had a seemingly impossible task at hand. Although the Pierce Brosnan era got off to a rousing start with GoldenEye, the series fell on hard times with the poorly received Die Another Day and The World Is Not Enough, the Batman and Robin of the Bond series.

When it comes to Idris Elba, looking like you could take a couple punches in a pub brawl isn’t a marketable quality.

The World Is Not Enough, after all, was the film that infamously cast Denise Richards as a nuclear physicist named Christmas Jones—who is about as convincing as a scientist as Tara Reid—and features what might be the worst double entendre in film history. After finally wooing his comely associate, Bond quips, “I thought Christmas only comes once a year.” That’s the last line of the movie.

And in 2002, while Pierce Brosnan was fencing with Madonna, Matt Damon gave us a younger, hipper version of the spy mythology in The Bourne Identity, which beat James Bond at his own game—both in terms of critical acclaim and, eventually, box-office returns. The Bourne Supremacy and The Bourne Ultimatum, at the time of their release, made more money (in current U.S. dollars) than any 007 movie in the history of the franchise.

Whereas Brosnan offered us an upper-crust dandy, the Bourne films were visceral, raw, and real—aided by Paul Greengrass’ virtuoso handheld cameras. The difference clearly struck a chord with the public. And when it came time to recast Bond, producers Michael Wilson and Barbara Broccoli clearly wanted what Jason Bourne was having. Craig not only broke from tradition in terms of his hair color (he’s widely referred to as “James Blonde”) but also his class demeanor.

After finally wooing his comely associate, Bond quips, “I thought Christmas only comes once a year.” That’s the last line of the movie.

The actor’s breakout role was the 2004 British crime film, Layer Cake, in which Craig plays a cocaine dealer in the London Underworld. Although director Matthew Vaughn would go on to establish himself as cinema’s reigning maestro of comic book ultraviolence (Kick-Ass, Kingsman: The Secret Service), his debut was clearly inspired by Guy Ritchie’s series of successful gangster films—with just a little more posh polish.

If those undertones of underworld danger made Craig a perfect fit for the role, it’s telling that the other actor who was in the running for Bond—Clive Owen—touted many of the same attributes. If Wilson and Broccoli wanted a “gritty reboot,” they could do no better than Owen, who broke out in Mike Hodges’ Croupier and I’ll Sleep When I’m Dead—in which he portrays, respectively, a gambler and a gangster.

His taste for the dark side also showed through in an Oscar-nominated role in 2004’s Closer, in which he plays a doctor, Larry, who talks about the human heart as if it were something that he could rip out of your chest. Clive Owen would prove his facility in those matters in the later Shoot ‘Em Up, in which he cuts a newborn baby’s umbilical cord by shooting it.

Idris Elba, a household name in his native U.K., has a similar résumé—playing gangsters and druglords with matter-of-fact menace; what makes his character in The Wire, Stringer Bell, such a consummate antagonist is his often businesslike demeanor. In another life, he could have been a CEO or in the CIA, but the streets—or rather, systemic disprivilege—chose him.

What separates Bell from Bond is, thus, a matter of class and racial circumstance, one that continues to be reinforced by tired notions of what an acceptable 007 looks like. Whereas James Bond can have an element of the “street” in him, Horowitz reminds us that the color of Elba’s skin means his dark dealings don’t come off as romantic. He’s read as a “thug.”

Clive Owen would prove his facility in those matters in the later Shoot ‘Em Up, in which he cuts a newborn baby’s umbilical cord by shooting it.

It’s a reinforcement of the Bonnie and Clyde principle: We’re only allowed to revel in cathartic acts of criminal behavior if the protagonists are white, the people we’re supposed to root for. If studies have shown that there’s a “racial empathy gap” when it comes to disparities along color lines, that process is only exacerbated by cinema.

As researchers at the University of Milano-Bicocca and the University of Toronto Scarborough explain, “the human brain fires differently when dealing with people outside of one’s own race.” Thus, if white people have difficulty feeling black people’s pain, they also struggle to identify with a black protagonist—and are less likely to see them as a surrogate for the audience in the way white characters are.

Thus, it makes sense that men like Horowitz would see having the vibe of a well-oiled crimelord as good for a white actor and bad for a person of color: because we code their behaviors differently. That discrepancy punishes black actors, who are more likely to be cast as the villain than a roguish antihero.

If you look throughout his career, there’s a reason that Idris Elba has played murderers and drug dealers—he’s rarely allowed to be anything else. Elba got small parts in Prometheus and Pacific Rim and has had but a handful of scenes in the three (yes, three) Marvel movies he’s been in, relegated to second-class status. It’s not just that he can’t get his own franchise. Like many other actors of color struggling for visibility, a lot of the time Idris Elba can barely get a line.

It seems Anthony Horowitz is right about one thing: Idris Elba probably won’t be James Bond—and neither will any other black actor. And if we end up with another white guy behind the wheel of the super spy’s iconic Aston Martin, we have to ask ourselves the real reason why.

Photo via johanoomen/Flickr (CC BY SA 2.0)