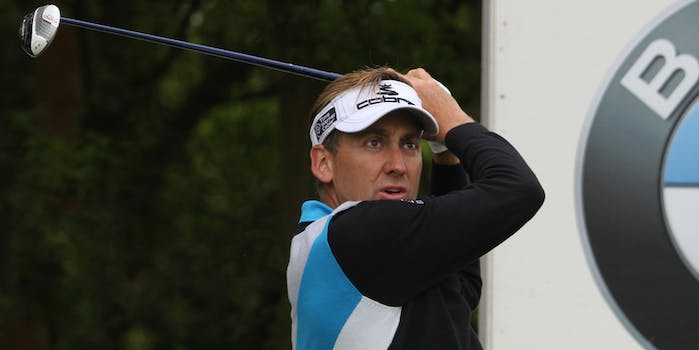 Since joining the PGA Tour in 2000, Ian Poulter has won two tournaments and finished second a total of four times while earning more than $17.5 million during his career. So yeah, the dude can play golf.

His kids should know that by now. Yet Poulter’s three children agreed to take on their father in a round of mini-golf, and though you might think daddy would take it easy on his offspring on the (miniature) course, you’d be wrong. Completely, totally wrong.

Because it turns out that Poulter isn’t one of those dads who dials back the intensity and maybe puts in 50 percent effort when he’s competing against his kids. No, Poulter is out to destroy.

It's now Putt Putt time…… Let's do this kids. pic.twitter.com/b1IuCPmfvd

Oh, you might have thought his kids were older. Like, 16 and 13 and 11 years old. No, his kids are young. Didn’t matter to Poulter, because this is how he treated them on the mini-golf course.

Boom first win of 2015…… Get in. Have that kids. 😜hahaha great fun. pic.twitter.com/oZ6dDxlNzT

As you can see, Poulter shot a solid 11-under-par 32, 14 strokes ahead of second-place finisher Luke. Katie, who’s Poulter’s wife, finished third—thanks, in large part, to the snowman she shot on hole No. 6.

Poulter gave plenty of play by play and took plenty of photos on his Twitter account, and he seemed to sense what was happening less than a quarter of the way through the round.

Scores after 4…. Dad being a meanie pic.twitter.com/PXOSIbQMqM

Daddy, indeed, was being a meanie. But then again, what are you going to do? He’s made $1.6 million on the PGA Tour this year, and he’s on track to finish with the most money he’s made since 2010. He didn’t get that way from not going 100 percent on the golf course. Even if, you know, that includes destroying tiny children.