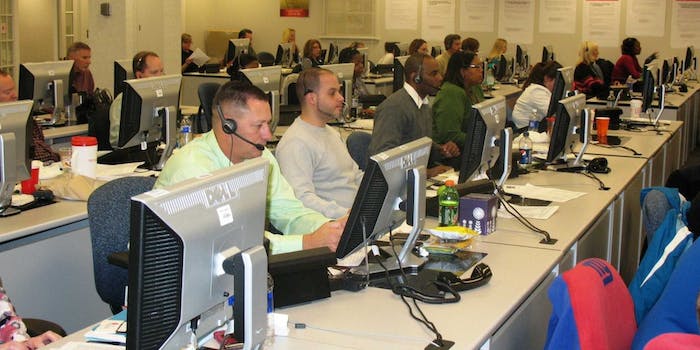 Comcast’s cancellation script isn’t as horrible as you think

Since the “Comcast call from hell” surfaced, we’ve all had a lot of fun maligning the company for something we’ve long known about it. Comcast is a monopoly that will, quite literally, force you into using its services.

It’s not as if this spectacularly horrible example of Comcast’s business practices is a diamond in the rough; we each have our own Comcast horror stories. From the impossibly inconvenient “we’ll be there sometime between 10am and 4pm” appointment slots we’ve all gotten stuck with to the calls about spiking prices that make no sense (“Oh, you didn’t want to keep HBO after the free trial?”), we’ve all experienced the “call from hell” in some way.

Now, Comcast’s call script for retaining customers has been leaked, and a similar field day is being had. And while I in no way want to defend Comcast, I unfortunately must. Because there is absolutely nothing wrong with this manual.

I was a “caller” in college. You know those people from your alma mater who dial you up, try and get all personal, and then ask you to give back to the school? I was one of them. And I loved it. I was great at it, so great that I was eventually promoted to Supervisor—and part of my job was not only to implement the script when I called people, but to help write it.

There’s a psychology to talking to people on the phone and getting your way. Cynics might call this manipulation, but I thought of it as healthy debate: I knew the person on the other end of the line, in nearly every case, did not want to talk to me and did not want to give me money, and I was going to convince them that the opposite of these things was true. And I was very, very good at it.

Parts of the script are still burned into my brain. Sometimes I see them when I close my eyes at night. I can easily still picture the call tree (“Yes? Go to Updates. No? Ask for more information.”) page.

“Hi, this is Molly and I’m a student at the University of Oregon! I’m calling today because we’re just getting in touch with alumni who graduated from the ______ department and letting them know some of the progress being made. I also wanted to just update your information really quick: Are you still at ______ on ______ in ______ , ______? Great! So it says here that you graduated from the Biology department—one of my roommates is a Biology major now! What made you originally pick that major?”

And from there, away we went. If he balked and tried to get off the phone, I had plenty of tips in the script to divert him back.

The script we used was like the backbone to our calls; calls often veered off the script, depending on who was on the other end, but we had a basic structure. Can you imagine a phone call with a stranger in which money-handling was involved and just winging it? Likely not; so yes, someone whose job requires them to sell a service or product to another person uses a script. My script, like Comcast’s, included pieces like “overcoming objections” and “updates and progress,” factors meant to engage and entice people (much like Comcast’s part of the call where someone tells you about all its features).

If someone told me he didn’t want to give because the school had discontinued his major, I would tell him about how it’d actually been rolled into a new program so that students could gain a more varied education in his field—and how that program was actually trying to raise funds for its own dedicated library on campus. (See what I did there?) If someone said she had no money, I would point out that you could give as little as $10 a month for a year, which can help a student struggling to buy books.

We also had a list of acceptable reasons to “close” a call without getting a donation. If we had a wrong number, it was OK to end the call, but only if we’d verified with the person this was indeed the wrong number. When I tell people this, they’re usually irate—but no, hanging up on me isn’t good enough. I need to ask if you are Ms. Melanie Johnston at 389 Hemlock Drive. No? You aren’t? I’m so sorry, we’ll take you right off the list! Lie to me if you want, it doesn’t matter; that’s all it takes to get out of this. Other options in the software that I remember that popped up when processing a “no give” call were things like “in graduate school,” “out of country,” or simply “not this year.”

Yes, sometimes the things that “get you out of call” were arbitrary, and sure, you can think it’s stupid that the script required me to ask you three times for money (which, FYI, was very effective). But what seemed stupid to me, the person who was paid to do this, is that we both knew this call was going to end, we just had to get through the prescribed routine together. And still, people rage over all this.

We all follow scripts for work (some of us more literally than others). There are forms for performance reviews and catchphrases you’re required to hit in pitch meetings. Teachers repeat the same lessons every year; doctors literally follow scripts with their patients.

If you want to hate Comcast because you’ve had bad experiences as a customer, I don’t blame you. But don’t cling to this detail in particular, because while what I was doing (raising money for higher education) is more noble than a monopoly that peddles cable and Internet at exorbitant prices, a call script is one of the things I would argue humanizes Comcast’s business.

And honestly, after the listening to the phone call that brought us all here, would you really want a Comcast rep winging it?