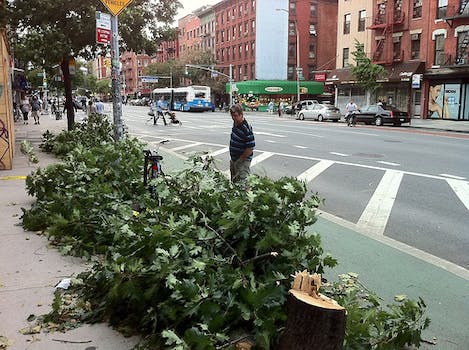 On Friday afternoon the Loggerhead Marinelife Center in Juno, Fla. posted a Facebook wall message giving details about a hurricane cleanup scheduled for the following morning.

“We’re hosting an emergency beach cleanup tomorrow morning in response to all the litter churned up by Hurricane Irene. We’d love your help! Meet us at LMC at 9 a.m. A light breakfast will be provided.”

The message drew 32 likes, 12 comments and — most importantly — a way to spread the message about the effort, which includes a portion of beach where tutrles hatch. The cleanup itself generated photos for the Facebook page, as well as more positive comments from friends of the center and people who had participated in the cleanup.

The beach clean up was awesome today– thanks for letting me be a part of it!,” Kimberly S. Byrne posted on a photo of the cleanup on Saturday night.

In Bellmore, N.Y. early Monday morning, AOL Patch reporter Emily Cappiello posted “There is an open jam in Bellmore and #Irene cleanup. See what you need to know today:” Many residents of the Nassau County community evacuated the area ahead of the storm and the town was hit with widespread flooding and damage from fallen trees.

In Hampton, Va., Bonnie Murray tried to put an upbeat spin on cleaning up.

The best part about a hurricane is meeting the neighbors during cleanup. Thanks Irene! #hurricanehysteria,” she Tweeted on Sunday.

Lafayette, La. resident Anna Purdy — no stranger to hurricanes — posted pointers on her Facebook page for friends in the northeast who may not be used to surviving and cleaning up from hurricanes. They ranged from the practical (“Cell phones probably won’t work for a day or two, landlines oddly come back sooner“) to the comical (“You need many, many jugs of water, matches & lighters, non-perishables, ice to the hilt, & lots of booze”).

Other people were using social networks to share photos of storm destruction and offer thoughts and prayers of people in the storm’s path. It was hard to log onto social networks on the east coast on Saturday and Sunday without seeing the simple phrase “stay safe, everybody.”

Musician Marci Geller of Stony Brook, N.Y., on her first overseas tour in Switzerland, was reluctant to boast on her Facebook page.

“I haven’t written much because we’ve been so wonderfully busy and also because it seems mean to boast when many of my friends are cleaning up after Irene:-( Sending good thoughts to you all from Switzerland and I promise details when I return…if we have electricity!” she posted on her fan page Monday.