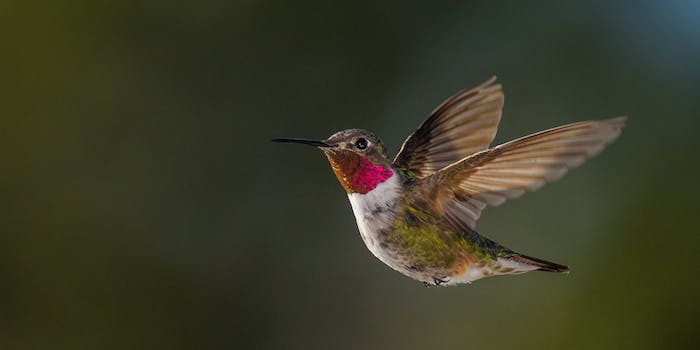 Hummingbirds need to drink more than their own weight in nectar every day. They have the highest metabolism rate of any warm-blooded animal, and they’re able to drink just enough to avoid starving to death overnight when they enter a hibernation-like state—then they wake up and have to start feeding again.

All of which is to say: These guys need any kind of help they can get. That’s where Bryan Chapman of Mississippi comes in. He was kind enough to mix up some sugar water for the birds in a red Solo cup to create the ultimate hummingbird frat party. Much like college sophomores, hummingbirds are attracted to the bright red color and will drink for hours at a time.

Hummingbirds also need a certain amount of protein, which they get by consuming insects and spiders.  No word on whether or not Chapman went out later with a cup full of those.

This is not the first time people have trained hummingbirds to trust humans. Here’s a video of a Wild Alaskan Hummingbird drinking directly from a person’s hand, complete with homemade 1980s-style synthpop.

Oh, and it’s important to note that the Audubon Society doesn’t recommend using red dye in your hummingbird feeder.  It’s possibly bad for the birds, and the color of your feeder—or cup—is enough to attract them.

How Chapman was able to hold a full cup of liquid and his camera so steady in his video is a mystery, since most of us would have been trembling with joy. Well done, sir, you are an American hero.