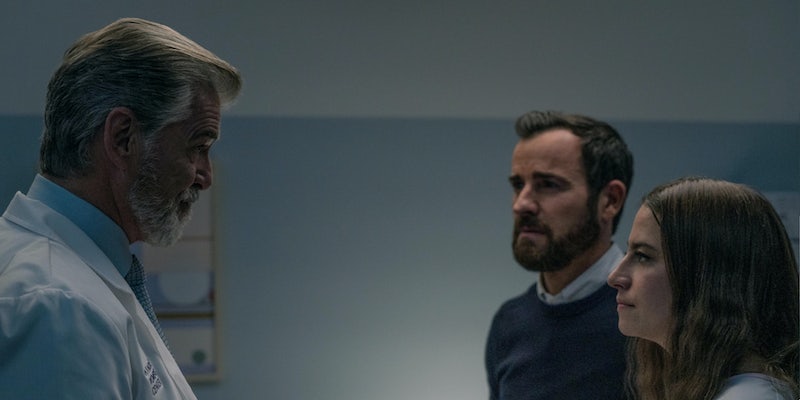 Ilana Glazer's first major movie role is not a comedic one.

False Positive doesn’t waste any time showing us where it will end up: In the first scene, protagonist Lucy (Ilana Glazer) wanders down the street, drenched in blood. But the journey there is complicated by a meandering script.

False Positive, an A24 production picked up last year by Hulu, concerns Lucy, an advertising exec who’s been trying to get pregnant for two years. Her surgeon husband Adrian (Justin Theroux) is supportive of her desire for a child, but he doesn’t really have much of a personality or point of view. He does, however, have a direct line to the best fertility specialist in the city, Dr. Hindle (Pierce Brosnan), whose practice is staffed with pretty blonde nurses like Dawn (Gretchen Mol). Hindle is Adrian’s medical school mentor, but somehow Lucy has never heard of him until now.

This is the entry point of the story, originally written by director John Lee and novelist Alissa Nutting, and fleshed out by Lee and Glazer (who is about to give birth to her first child). Lucy quickly becomes pregnant, but as she grows so do her suspicions about everyone around her.

Glazer is such a talented comedic actor, and pregnancy horror certainly lends itself to dark humor, but False Positive keeps its satire pretty sterile. The film isn’t horror on the level of Rosemary’s Baby, which it’s being compared to and obviously draws from. False Positive’s horror comes from the misogyny ingrained in medicine, the gaslighting and god complexes, and the history of pregnant bodies being controlled by men who believe they know better.

But we don’t learn much about Lucy. There’s a subplot involving her finally getting a break at work—while still having to take lunch orders for the guys in the office. She says at one point that maybe she can have it all, motherhood and career, but the professional part of her life isn’t explored much deeper. Instead, we’re left to wonder just how she and Adrian got together, and where everyone else in Lucy’s life is.

Once she starts to hear about “mommy brain,” a phrase repeated by her perky new friend Corgan (Sophia Bush), her intuition kicks into high gear but it’s also just one more example of the condescension new moms and moms-to-be are met with. It’s no surprise women reportedly hid pregnancies during the last year of remote work, or while looking for jobs: Many employers and workplaces still treat pregnancy and motherhood as a distraction.

While the narrative starts slipping about halfway through, False Positive at least looks good: There are plenty of slow dissolves, meant to convey loneliness and creeping anxiety. Midsommar and Hereditary cinematographer Pawel Pogorzelski gives the film his signature gloss of dread, and Lucy Railton and Yair Elazar Glotman’s score keeps up the dreamlike pace. Lee has done plenty of TV work over the years (including Broad City), and the 92-minute False Positive feels like maybe it should have been episodic.

Unfortunately we only see Lucy get some bloody revenge in the last 15 minutes, when the film finally heaves forward. If anything, False Positive shows Glazer can tackle the comedic and dramatic.