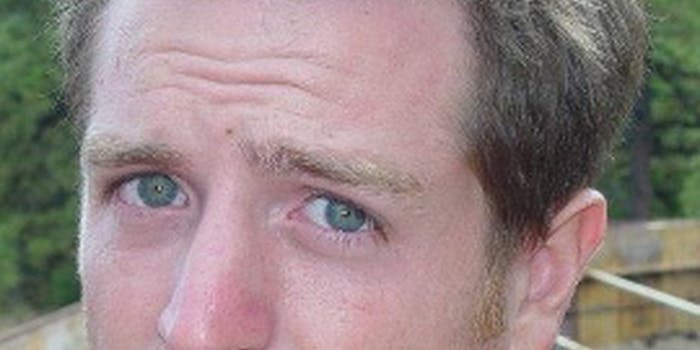 The book blogosphere may not have much goodwill left for Hugh Howey, who took to his blog and Goodreads to deliver a rant titled "The Bitch From WorldCon."

Self-publishing wunderkind Hugh Howey may have relied on the kindness of strangers to boost his viral hit Wool into a word-of-mouth Amazon sensation, a major publishing deal with Simon & Schuster, and a lucrative movie deal. But after he took to his blog and Goodreads to bash one woman he met at last year’s WorldCon, the publishing blogosphere may not have much goodwill left. 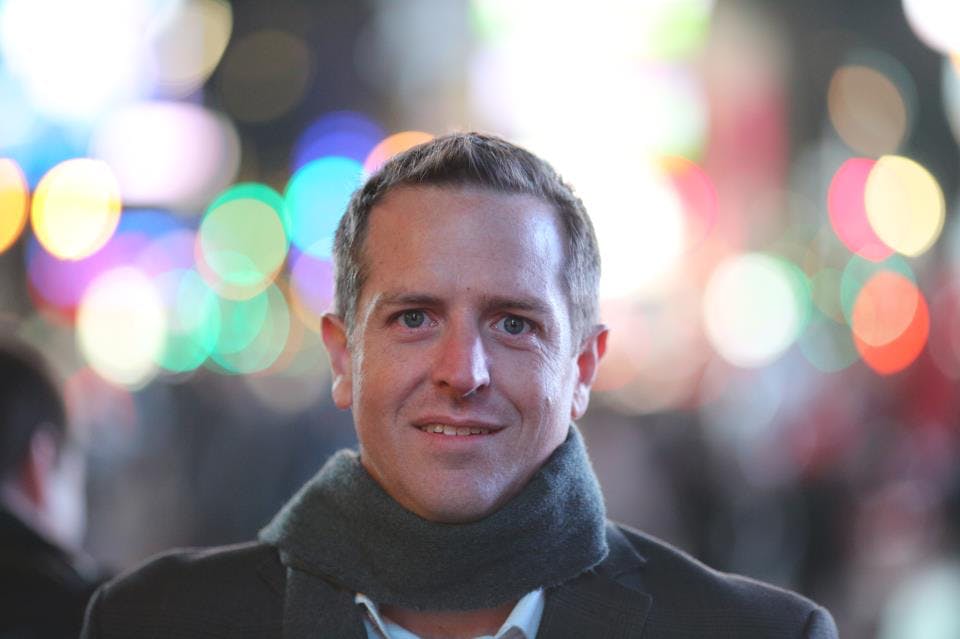 According to Howey, his wife told him that a story titled “The Bitch From WorldCon” (here’s a cached version; here’s a screengrab) wasn’t the smartest thing he could post, but he ignored her and published it anyway.

The result: fierce backlash from readers and publishers alike over his portrayal of an unnamed female convention attendee, whom he calls “the batshit craziest broad at all of Worldcon.” The rant gets more disturbing from there, devolving into a “fantasy” of grabbing his crotch and telling her, “Suck it, bitch.”

Howey recalls how he waited in line for half an hour listening to a woman promise another writer she’d find him an agent. When Howey joined the conversation to talk about self-publishing, however, she was far less enthused:

According to Howey, the woman asked him rudely what awards he had won for his work. The question prompted this:

I had a fantasy while I was sitting there. I think every writer, aspiring or real, sat in that crowd and had the same fantasy. I was up there on that stage, in 2013, winning a Hugo. And for my acceptance speech, I scanned the dark crowd and somehow found her out there. And I told this story. I may even have grabbed my crotch or something like that—the fantasy gets hazy. I told this story, and I called that poor girl who just doesn’t know how to interact with other humans, a bad word.

Howey’s posts remained untouched for a full week until the wider publishing sphere caught wind of his comments and began reacting on Goodreads and Twitter. “I’m disturbed beyond reason by your use of the word ‘bitch’ and your fantasy about grabbing yourself to prove something to her,” young-adult fiction author Lauren DeStefano tweeted to Howey earlier today. “I know what it’s like to face condescending/rude people and challenges as an author, but that was a truly horrific response.”

“‘Crazy bitch who needs to be slapped’ are words that carry very different connotations than ‘rude, ignorant person who is wrong,'” noted romance author Courtney Milan.

Though initially he apparently promised to leave the post up for critical commentary and discussion, Howey has now deleted his Goodreads post and replaced his blog post with a semi-apology in which he thanks his wife for standing “behind him.” Many readers felt he missed the point entirely. 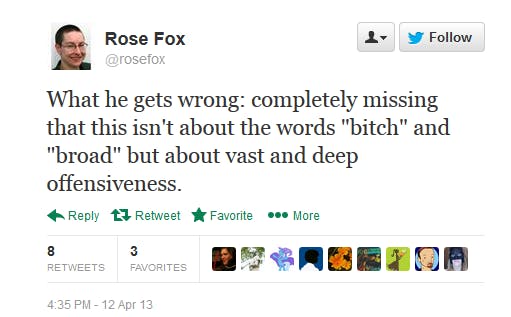 In the wake of the non-apology and deleted posts, many readers and publishers confessed themselves disenchanted with a self-publishing guru whom many had seen as the poster child for the Amazon model. An anonymous YA author explained to the Daily Dot that the gender issues were especially relevant to Howey’s rant because he was the first major self-publishing phenomenon who, unlike Amazon’s first fiction phenomenon, YA novelist Amanda Hocking, or Fifty Shades of Grey‘s E.L. James, wasn’t a woman writing to a female audience.

Well, decide for yourself. The complete text of “The Bitch From WorldCon” is below.

True story. I’m waiting in line for the Hugos last year (no, not to receive one, to attend the ceremony), and as is my wont, I chat up the strangers on all sides of me. As one might expect at WorldCon, everyone around me was a writer of some sort. There were two Canadians behind me just breaking out on the scene. We had a nice chat, right up until the batshit craziest broad at all of WorldCon joins the conversation.

Now, I have nothing against crazy people. They are my people. And I don’t have anything against socially awkward people with high functioning autism. Again, those are my peeps. This is why I feel quite at home at WorldCon, comic book stores, basement D&D sessions, and dermatologists. What I can’t stand are rude people. And this bitch was downright mean. But I’m getting ahead of myself.

I should point first of all that I don’t tell people who I am or what I do when I’m at conferences. I often check to make sure my badge is the other way around, hiding my name. I enjoy anonymously viewing the world around me, talking to strangers, absorbing my environment. I always prefer to ask someone what they do and listen to their story rather than regale people with my nonsense. And so, I stood in line for half an hour and listened to a girl in her early twenties tell a quite serious writer from Canada that she could get him an agent, no problem. Without ever having read his work.

“You’re going to do great,” she told a man a dozen years her senior after two minutes of talking to him. “You’ve got a great career ahead of you.” She said this over and over.

Now, picture Sheldon’s girlfriend from BIG BANG THEORY. Really. That was her if such a person really existed. Big-toothed and nodding and telling people how great they were. Bear with me; the mean part is coming.

“I’ve got a friend at such-and-such magazine who reps people. I was an intern there. Give me your information. She would love to rep you.”

At this point, it was just entertaining and awkward (though already quite mean to promise an agent to a complete stranger. Mean to both parties, frankly). And then one of these nice writers from Canada asked me what I was doing at WorldCon, which was when things got testy. I admitted to being a writer. Crazy girl asked who I was published with. “Self-published,” I said. No point in mentioning the Random House deal or the SFWA membership. Those weren’t what I was most proud of. The girl shook her head sadly and also knowingly. It was a complex bit of head shaking.

There was a period of quiet mourning. A little bit later, one of the Canadian writers lamented the dwindling outlets for publishing short fiction, and I mentioned the Kindle Singles program. “They pay 70% royalties,” I said. “Great exposure. Not a lot of speculative fiction up there yet.”

“But it’s Amazon, right?” Not that he was bashing Amazon. He was just curious.

“Yeah. I just submitted a piece.” In fact, it had been accepted just that morning, while I was there at WorldCon. I was still jazzed about it. Everyone was lamenting the death of the short form, but all I could see was its rebirth.

It was like a she-devil sitting on this man’s shoulder. I could see him withdrawing from me and toward this young girl promising him an agent and a great career. I was sad for him. I was the self-published pariah, the freak.

“I know a lot of people doing pretty well self-publishing,” I said. I didn’t mention one of them was me. “It’s a great way to get your work out there.”

Now for the humdinger. Later, when relating this story to my wife, she turned bright red and said, kid you not, “I woulda slapped that bitch.”

So this girl looks at me, dead serious, with a crowd around us, and asks: “And what awards have you won?”

She waited for my answer. I was stunned speechless. I looked to those around me, who to their credit were also agape at this wanton display of snark and uncouthness.

“No awards,” I said, keenly aware that we were in line to witness the handing out of the Hugos. “But I get great reviews from my readers. And that’s award enough.”

I really said this shit. And I meant it. And yes, it sounded as corny then as it does in the retelling.

She really made that sound.

And I had lost them, those fine Canadians who were just as sweet and hilarious as you expect Canadians to be. Because we were in line together, we sat in the same row at the Hugos, and this Bitch from WorldCon sat draped all over them, promising them glimmering careers and stacks of trophies. Neil Gaiman and George R.R. Martin collected their awards. We all clapped, none more loudly or proudly than Sheldon’s girlfriend. For all I know, she introduced them to their agents.

A few weeks after WorldCon, I got a Facebook friend request from that Canadian author. He had tracked me down, read up on my work, and wanted to know more about this other avenue toward publication. I really like the guy and truly believe that he has a career ahead of himself. He’s doing everything the right way, taking his craft seriously, looking to get short works published, writing longer pieces, workshopping and reading and honing his skills. Most of all, he’s keeping an open mind and digging that demon’s whispers out of his eardrums.

Me, I kept my cool and sat there quietly and enjoyed the hell out of the Hugos. But I’ll admit that I had a fantasy while I was sitting there. I think every writer, aspiring or real, sat in that crowd and had the same fantasy. I was up there on that stage, in 2013, winning a Hugo. And for my acceptance speech, I scanned the dark crowd and somehow found her out there. And I told this story. I may even have grabbed my crotch or something like that—the fantasy gets hazy. I told this story, and I called that poor girl who just doesn’t know how to interact with other humans, a bad word.

Alas, the Hugo finalists were announced this week, and I didn’t make the cut. Not that I expected to, but it means the crotch-grabbing dream has finally come to an end. But wait. What’s this Tweet I see tonight? Big Al’s Books and Pals gives out a Reader’s Choice Award? And I won?!