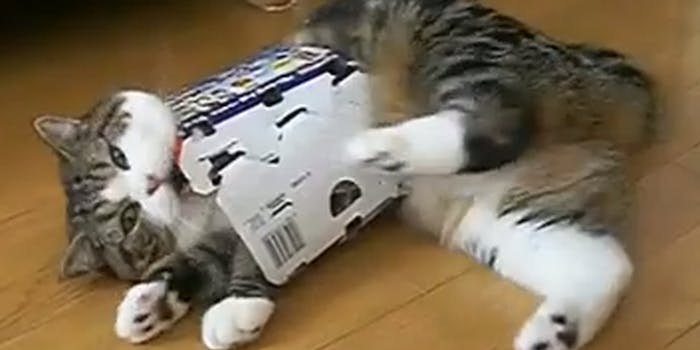 How to make your cat Internet famous

The secret to cat fame can be easily explained in one helpful acronym: Countenance, Attitude, and Talent, or C.A.T.

Fifteen million people have watched the YouTube video “特訓するねこ,” (one translation: “Crash Course Cat”), starring a fetching Scottish Fold by the name of Maru. That’s pretty amazing for a 92-second video produced on a budget of whatever four packages of Japanese diet drinks ran for in 2008.

Maru, a Fresh Step model that also advertises products in Japan, makes his anonymous owners some serious bank—not just from YouTube ad revenue but also several books and DVDs. While the chances of turning your Trixie into a Maru-money-machine are slim, anyone with a cat or access to one can aspire to such things.

From the Maru model, it’s evident that the cat poses a triple-threat of abilities that make him almost impossible to resist.

What follows is a guide on how to make your cat Internet famous and work for you. And like any surefire guide to improving your life, the secret to cat fame can be easily explained in one helpful acronym: Countenance, Attitude, and Talent, or C.A.T.

Dare to dream the impossible dream.

A stretched synonym for “appearance,” countenance can not be understated. Like with a job interview or a date, it’s the way a cat looks that’s going to capture the viewing public’s attention. Many cats make their reputation on looks alone: long cats, fat cats, grumpy-appearing cats, and cats with eyebrows.

Sometimes it helps to create a story around the appearance. The owner of Colonel Meow, Anne Marie Avey, parries the expressions of her disgruntled-looking adoption into a personification of the Colonel as a bedeviled scotch-drinker. It’s a fantasy (probably), but one that has maintained almost 140 thousand rapt Facebook followers.

Tip o’ the tail: Does your cat look fairly normal? Try a costume, a fetching hat, or throwing around some dollar bills.

Attitude is both the most important if attainable function your Internet cat can offer. Cats are by turn loving and hateful, hissy and kissy, up for anything and totally bored with you. It’s this dynamic that perplexes us about cats and what makes them fascinating.

Can you capture, visually, the inner weirdness that makes your cat unique? Even the most blase cat possesses attitude. The following video was featured on CNN (and many other places), and centers around a normal-looking cat doing a normal thing—knocking over a jar. What makes the video so sublime is the cat’s post-destruction yawn, which is both unbelievable (smashing things is fun, wtf?) and totally on par with what you might expect. (Cats are normally bored, tired, or both.) It’s an everyday activity for a spawn of mischief—and it’s endlessly loopable for us.

Tip o’ the tail: This one’s innate, so just film and wait for it. Possible ways to entice cats into action include tempting their curiosity or a pinch of the good stuff.

This is the hardest cat commodity to find, because most cats couldn’t be bothered to explore even the germ of their extra-curricular abilities. Trickery provided by treats, coaxing, and attention can take cats to the next level, but the encroachment of sleep is often a deterrent for the average housecat. But does it have to be this way? Maybe not.

Tip o’ the tail: Chicago cat trainer Samantha Martin has been traveling the country with her “Acro-Cats” since 2009. Her troupe is skilled in feats including jumping on cue, bowling, and “making” music, and at live performances she sells a training kit that she claims can transform any feline into one that will do tricks for treats. Is it viable and worth your time? Possibly, possibly not. But a skill can be the one thing that turns even the most blasé cat into a dancing, click-through machine.