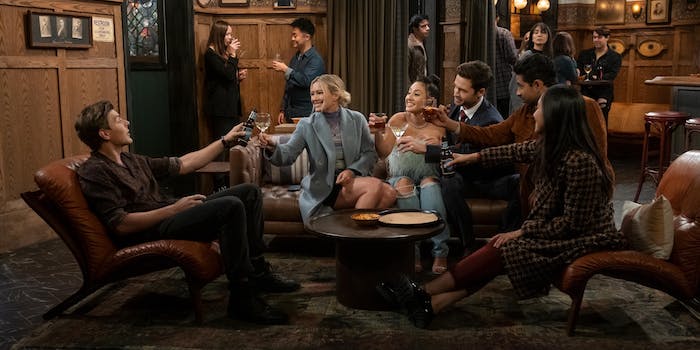 Hilary Duff stars in the sequel to the hit CBS sitcom.

Hulu’s How I Met Your Father, which debuts nearly eight years after its predecessor—the CBS sitcom How I Met Your Mother—went off the air, comes ready to play with a lot of baggage. While the series was popular throughout its run, HIMYM is remembered more for an ending that may have hued close to its original vision but burned its audience in the process. It also, sight unseen, reminds us that HIMYM creators Craig Thomas and Carter Bays once tried making a gender-flipped spinoff (and even shot a pilot starring Greta Gerwig) that was never picked up. (Thomas and Bays are attached to HIMYF as executive producers.)

How I Met Your Father

RELEASE DATE: Jan. 18, 2022
CREATORS: Isaac Aptaker and Elizabeth Berger
STREAMING: Hulu
A woman relays the trials and tribulations of dating in 2022 as she tells her son the story of how she met his father. Framed as a sequel series to the long-running sitcom ‘How I Met Your Mother,’ it’s much more inclusive this time around but lacks the charm of its predecessor.

Creators Isaac Aptaker and Elizabeth Berger (Love, Simon; This Is Us) tweak the format along the way—dating apps are a natural part of things, for instance—and the show’s version of New York is a lot more inclusive than its predecessor ever was. But the baggage is heavy, and in the first four episodes provided to critics, HIMYF struggles with that weight. The cast is full of mostly likable characters, but they struggle to gel together, and while most of the show may take place in a COVID-free 2022, the show feels dated by several years.

The initial premise of HIMYF is more or less the same as HIMYM’s. In the year 2050, Sophie (Kim Cattrall), lounging in her apartment after a few glasses of wine, hops onto a video chat with her son who we hear but never see, and decides to tell him the “unabridged version” of how she met his father. In showing Cattrall in fun wine mom mode, it’s an immediate reversal of HIMYM’s device of showing Ted Mosby’s (Josh Radnor) children listening to the story while we only ever heard the late Bob Saget narrating as an older Ted.

Cattrall is game, and it gives the writers a chance to take jabs at silly things we’re obsessed with now (but probably won’t be in 28 years), but the son’s interjections—including questioning why an episode-long tangent is necessary—highlight the format’s limits in ways that don’t do it any favors.

The younger Sophie (Hilary Duff) is a photographer who’s on the cusp of turning 30 and looking for the person she wants to spend the rest of her life with. Instead of going out to bars, her main mode of finding dates is Tinder, and despite having gone on dates with 87 men she met on apps this year, she’s still optimistic that her next date could be the one; the motto she lives by, she tells another character, is “Today is the first chapter of my next great love story.”

Like Ted, she has a friend group on her side. Her roommate Valentina (Francia Raisa) just returned from London with Charlie (Tom Ainsley), a British model who has little idea how to function outside his old posh life. They soon befriend Jesse (Chris Lowell), a cynical music teacher and Uber driver who’s still haunted by a failed proposal that went viral; his roommate Sid (Suraj Sharma), who owns a bar and is in a long-distance relationship with a doctor doing her residency in Los Angeles; and Jesse’s sister Ellen (Tien Tran), who recently moved to New York from Iowa after she and her wife split up. Ian (Daniel Augustin), a marine biologist, and Jesse’s colleague Drew (Josh Peck) are just a couple of the potential love interests Sophie meets along the way.

With some nods to HIMYM both in its visual style (HIMYF also uses the quick cuts to depict certain scenes just referenced, and there is a laugh track) and some Easter eggs, HIMYF is attempting to forge its own path. Even though it airs on Hulu, the show doesn’t try to push that envelope beyond some colorful language and sex toys coming up in one episode.

But so far, the path it paves isn’t particularly interesting to watch and the laughs are far and in-between. The characters are likable but mostly forgettable, the dialogue is often stilted, and many of the plots have been done better in other sitcoms. Duff is great (although it does serve as a reminder of the other TV show with Duff as a 30-year-old dating in New York that could’ve been), but she can’t carry the entire show on her shoulders. That leaves her and the rest of the cast experiencing the same kinds of scenarios—a night out clubbing, a hectic birthday party—we’ve seen done countless times before, but even more cringeworthy.

But there are some threads worth exploring hidden underneath HIMYF’s staleness, and the show’s fourth episode, which is partly centered on siblings Jesse and Ellen, shows some promise. But right now, it’s working the way it often does when you put on a front in your dating app profile or those early dates: quite badly, and most people can tell that you’re doing it.

The first two episodes of How I Met Your Father are now streaming. Subsequent episodes will arrive on Tuesdays.