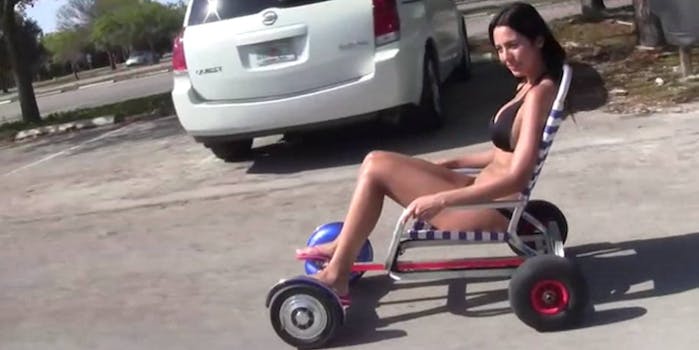 Strap your beach chair to hoverboards and chase the endless summer

Two hoverboards are better than one?

Oh, what a world we live in. Hoverboards are still popular, and people are trying to customize them. Sometimes the results are actually kind of cool, like with this real life Aladdin riding a faux magic carpet through the streets of Tel Aviv. But most of the time, these glorified spontaneous-combustion devices turn into something even worse when meddled with by riders.

Enter the “hoverboard with beach chair attachment,” perhaps the stepson to the motorized ice chest. It’s… well… um… just watch this GIF of someone cruising around a parking lot on it:

Cheap-ass DIY’ers are undoubtedly rejoicing at what looks like the most frugal modification ever. You could not find a more flimsy chair to basically strap to a yardstick. The hoverboards themselves could explode at any minute.

This is the epitome of #YOLO and may very well be the start of a hoverboard mod revolution. Simply attach anything you can find that’s $10 or less at a drug store to a ruler, duct tape that shit to some sweet hoverboards, and bam: You’re now the realest.

Until you get that DUI.