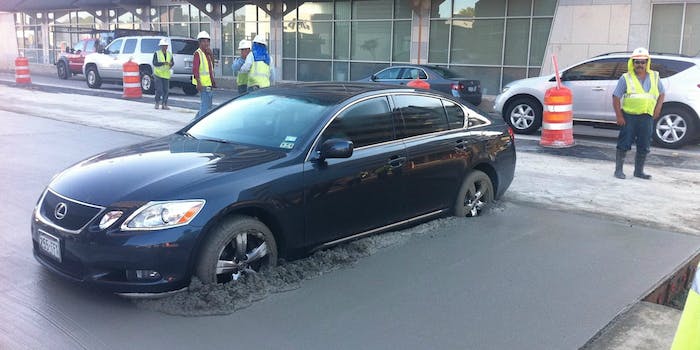 Thanks to keen-eyed redditors, we got firsthand reports and a full view of a Lexus stuck in fresh cement.

Like fresh cement, the Internet has a way of solidifying otherwise fleeting moments.

So it went for one uncoordinated Houston driver this morning after she plowed into—and got stuck in—a newly poured roadbed. On Reddit, users of the social news site instantly gave her mistake online immortality.

The event happened at 8:30 a.m. on Norfolk Street, a busy thoroughfare in the southeastern Texas city. Shortly thereafter, redditors  56ksatan,  austin713, galactica216 each uploaded similar images to the social news site (some of the pictures may have taken by the same person).

The images became popular, fast—galactica216’s image alone was viewed over 160,000 times, according to image hosting site Imgur. Other redditors quickly put together the pieces, noting that the three photographs essentially formed a complete view of the scene.

The Houston Press, which was tipped off by the posts on Reddit, reported that the driver of the car  was a lawyer and the area was blocked off by orange cones.

One redditor, changitochulito, claimed to have witnessed the event from his or her office, five stories up: ”There were some barrels, but there was one section big enough to drive through. The thing is they had just finished pouring and shaping the cement not but 5 minutes before it happened… Looks like this woman was trying to make a u-turn to a side street. This intersection is the worst. In the 12 years I have been in this office, I have heard and seen easily over 50 accidents.”

But this was very likely the first incident to get worldwide attention.