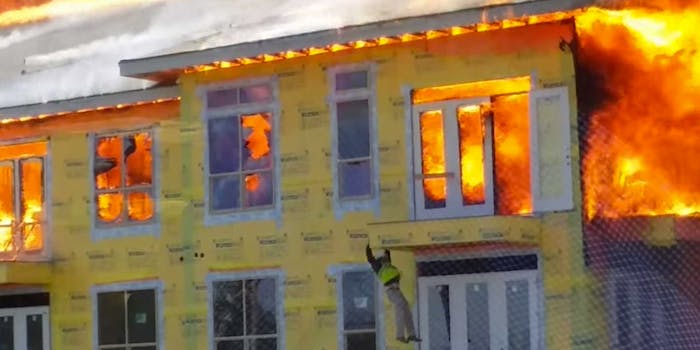 Watch a construction worker’s dramatic rescue from a burning building

A YouTube video has captured the rescue of a construction worker from the Houston apartment fire.

After a terrifying blaze swept through an apartment complex in Houston yesterday, all construction workers were accounted for. However, one worker nearly didn’t make it out. In a dramatic video captured by an onlooker, we see a builder standing on a ledge of the burning building, the apartment complex collapsing around him.

With the ladder from a fire engine moving towards him agonisingly slowly, it appeared there would be no hope. But the man shows off a deft swinging drop onto the floor below and lands safely, just as the fire threatened to totally surround him.

The firemen on the ladder were madly trying to move it faster, one of them throwing a glove at his colleague at one point, and in the end the worker had to make a small jump to get onboard it. And just as the ladder pulled away, most of the building collapsed, missing the ladder by mere feet. As Houston fire captain Ruy Lozano said, it was “pretty much seconds before the fire would have overtaken him.”

The cause of the fire that overtook the $50 million building is still unclear, but one thing is for sure, this worker had luck on his side yesterday.