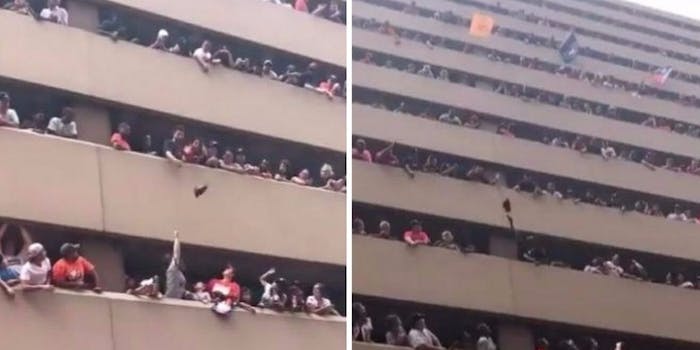 Not all heroes wear baseball uniforms.

In what has to be the most impressive moment from the World Series parade on Friday to honor the Houston Astros’ MLB title, watch a crowd of celebrating strangers on a parking deck retrieve a ballcap that was dropped and get it back to her in the most efficient (and coolest) way possible.

Yeah, it’s basically just a hat being tossed around, but it’s oddly exciting. And the crowd is loving it.

This lady dropped her hat, and Houston came in clutch to get it back up to her #earnedhistory pic.twitter.com/1thxzO7B6i

The never-say-die attitude is also impressive. Twenty seconds into the video, somebody misses the catch and the hat falls a few stories. Luckily, somebody else showcased his own skills and retrieved it before it could fall to the ground. And from there, the hat returned on its vertical journey to its rightful owner.

As you can see, heroes don’t always wear baseball uniforms.