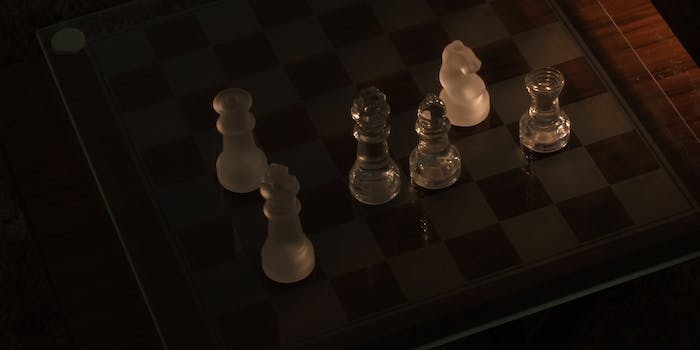 As global monoculture continues to expand, we still have heroes making moves on their own terms.

I love the Internet. It can get frustrating sometimes, but mostly the Web is a place where millions of weird, fascinating people are sharpening their talents and passions, happily stowed away in their independent scenes. This is the dream. Even as global monoculture continues to expand and percolate, we still have heroes making moves on their own terms.

So think of this as a new series at the Daily Dot. I don’t know what we’re going to call it yet, maybe “Internet exploring,” or “the doors of obsession.” I don’t know. But basically every once in a while I’m going to type something that we know exists into YouTube and see what we can find. This week I’m everyone’s favorite ancient abstract strategy game, chess.

We both know that weird high-level chess videos have to exist on the Internet, and that they’re probably impossible to parse because they’re so deep-seated in jargon. This is the theory, let’s find out if it’s right.

This is already incredible. I could drift off to such a beautiful sleep with this on a loop. We’re not even a minute in and our man Kingcrusher says the words “it’s as though white is playing against the Sicilian Dragon.” I didn’t know that chess involved the nicknames my friends gave themselves in elementary school. I’m all the way in, what’s next?

Alright, here we go. Whenever I’m curious about a specific scene I get an intense feeling of satisfaction when my YouTube spelunking uncovers a six-hour-plus video. It’s a big, shiny arrow pointing to a rabbit hole. This is game five of eight from the 2013 FIDE World Chess Championship. It’s between a middle-aged man named Vishy Anand and super-chic alien Swedish young gun Magnus Carlsen. They routinely take something like 30 minutes between plays. Watch and let your eyes roll back into your head.

My favorite part is that the crazy downtime forces the commentators to just fill. A suburban dad staring at a chessboard is not great television so they’re forced to spindle off into dozens and dozens of potential plays: “Well Tom, if he goes ahead and does pawn to C5 that’ll open up so much for him with his bishops. But if he does pawn to D4, well I tell you, that’s a very high-risk, high-reward option.” Then the player does something that neither of them talked about, and they’re both just like “oh.”

The literal first thing Carlsen does after he sits down is move his pawn up two spaces, and the commentators pop like he just hit a full-court shot with his eyes closed. I know this game is far more complicated than we could possibly understand, but I feel like I could’ve done that.

My second-favorite thing is Tania Sachdev. She’s one of the best chess players in the world and the eighth female grandmaster in Indian history. You are going to catch feelings for Sachdev so fast it’ll make your headspin.

OK that was fun, what else do we have?

Let’s go back to the same championship, but this time for game nine. Vishy Anand and Magnus Carlsen again—let’s skip to hour three and minute 27.

The commentators are getting hyped because we’re down to a few final, crucial plays. Chess waifu Tania Sachdev pops off an “oh my God. I’m very excited right now,” because Carlsen turned his pawn into a queen.

But then Vishy does the unthinkable. He moves his knight to F1! Knight F1! The announcers are shocked! It’s a huge blunder. Vishy stares at the table for a few more minutes—quietly resigned knowing he made a move he can’t come back from.

And here’s the thing. If you look at the board you will have absolutely no idea why moving Knight to F1 is a bad play, because we are idiots. If I don’t know anything about football, I can still comprehend a good play by the simple geometry of the field. To follow high-level chess, you need to be so deep in the metagame that you start to transcend mortality. Only then can you understand why Vishy moved his Knight into a bad place, and immediately conceded. These people love this game so much that they’ve forced their brains to think about things 20 moves ahead. Meanwhile, I can’t remember which pair of pants I left my wallet in.

Is there anything else we missed? Let’s see.

Nope! That about does it. Check back next time.

Photo via Alexey Kats/Flickr (CC BY 2.0)