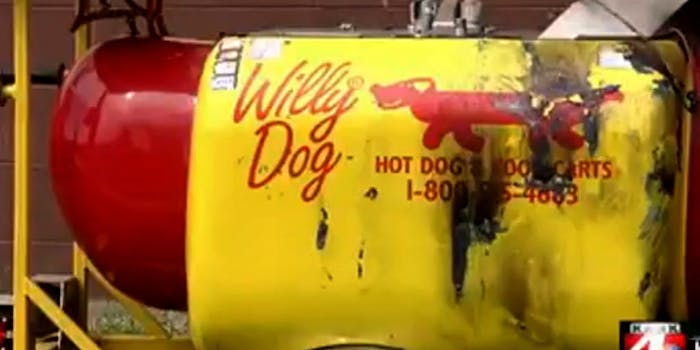 Ean Bordeaux said he never planned to kill the man, only detain him.

Ean Bordeaux, who runs a blog chronicling local police corruption, said he was woken up around 4am Friday morning by his dogs barking. Looking out the window, he saw his hot dog cart engulfed in flames.

Since the stand was powered by propane canisters, Bordeaux was worried the fire might spread and “[blow] up the house.” So he bolted out the door in his bathrobe to put out the flames as fast as he could, at which point he saw a “white man in a mask” running away.

“And this is the hood,” he said. “So I don’t know what masked white men are doing in the ghetto.”

Bordeaux called the cops. While he waited, the man in the mask returned, attempting to rekindle the fire while Bordeaux watched through the windows. This time the blogger chased him down, hoping to detain him until police finally did get on scene. But when Bordeaux tackled him, the man hit the pavement face first, which was apparently enough to kill him.

When Bordeaux finally saw the face beneath the mask, he immediately recognized him: former Little Rock PD officer Todd Payne, the subject of a number of withering criticisms on Bordeaux’s blog, Corruption Sucks. Payne was fired from the force in 2010 for a number of offenses, including dereliction of duty, failing to respond to calls for assistance, and apparently fleeing the scene of a DUI.

“This crooked dude was still a cop at the time when he ran into a bridge structure drunk as all shit on Bud Light in North Little Rock,” Bordeaux wrote about that event in one of his entries on Payne.

Bordeaux said he never planned to hurt the former officer, who he believes set the fire as retaliation for the blog posts.

Police briefly detained Bordeaux on Friday, before letting him go. It’s not clear yet if he’ll face criminal charges.