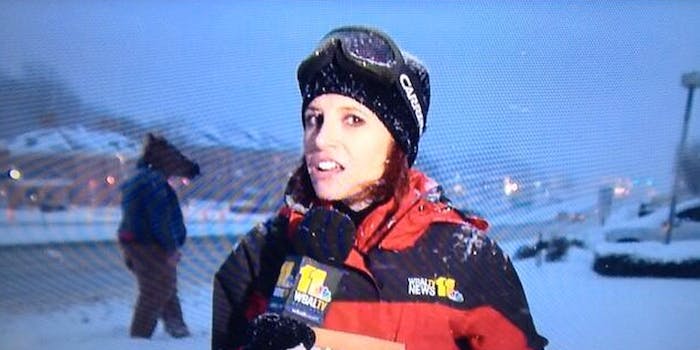 It could be the grocery line, a wedding reception, or the receptionist’s desk at a local law enforcement office: There’s no bad time to see a man in a horsey mask. In fact, the more dire the setting, the more welcome the mask.

That’s something that WBAL TV reporter Kate Amara learned the hard way yesterday. She was in the Baltimore suburb of Ellicott City reporting on the state of Friendly’s ice cream bars during winter storm Janus yesterday during a 6pm news telecast when a rather rotund man in a blue sweatshirt and oversized horse head went meandering by in the background.

Amara—who was wearing ski goggles for some reason—didn’t seem to notice, but the whole damn Internet did. And the legend continues. Even in a snowstorm, you can always count on this type of legendary horseplay.