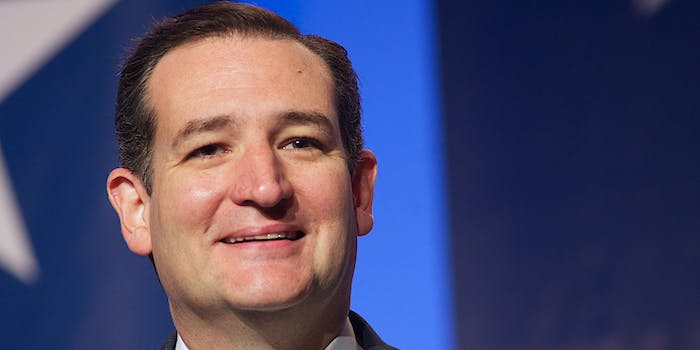 By now you may have noticed that senator and presidential candidate Ted Cruz is… problematic. Whether he’s holding a gun event following a public shooting, cooking bacon with a machine gun, or encouraging voters to spank Hillary Clinton, it’s pretty clear that Ted Cruz is kind of the worst.

nations infrastructure is crumbling – big gov't not the answer- we need private enterprise. my wife is gone tonight if ur around come over

The duo behind the account, a pair of friends who wish to remain anonymous, told the Daily Dot, “It all got started when one of us said to the other, ‘Hey, I think I’m gonna make the Twitter account @HornybenCarson,’ and the other said, ‘Let’s make it together, and do @HornyTedCruz instead.’”

The avatar they selected certainly illustrates their point. 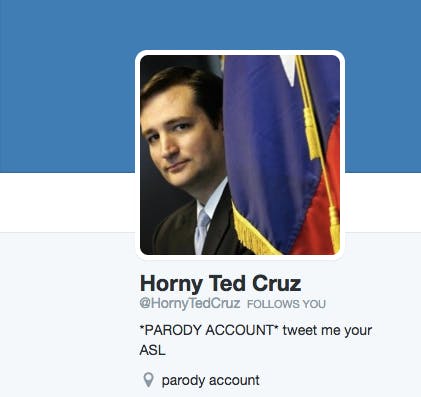 “Whether that twinkling look in his eyes comes from his hatred and discrimination against minorities, immigrants, and women, or if it comes from his insatiable sexual desire, he has a unique look,” the duo insisted.

That look becomes even more hilarious when paired with @HornyTedCruz’s 140-character pickup lines.

heard a rumor that @HamiltonMusical has live sex scenes anyone have an extra ticket?

Great song, hmu if u want to listen to Weezer and get naked

Perhaps the funniest tweets are those that exemplify just how a fumbling Ted Cruz might flail about searching for action on the Internet.

Can the NSA or my wife track my search history if I use google chrome private browser?

wyd i just got this cool webcam lets chat pic.twitter.com/KrBKZpolVU

Any good chat rooms for republicans ?

But mostly Ted just wants to know where the party’s at.

Welp, we can’t argue with that.

Photo via Jamelle Bouie/Flickr (CC BY 2.0)