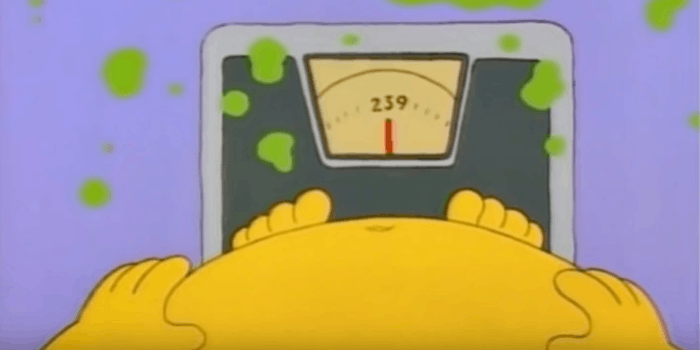 Simpsons did it again.

“Simpsons did it!” goes the popular refrain, pointing out that the ’90s TV show was decades ahead of its time in terms of humor, but also in terms of predicting the news. Well, Simpsons did it again this week. The media has made much of President Donald Trump‘s claims that he weighs 239 pounds and isn’t obese. Guess who else weighed 239 pounds? The famously bloated Homer Simpson.

To those skeptical of the president’s health report—which lists him as an inch taller than he’s previously claimed, and a weight barely under the line for obesity—the coincidence couldn’t be more perfect.

“239 pounds! I’m a whale! Why was I cursed with this weakness for snack treats?” Homer moans in the season 1 scene.

Although many have warned against fat shaming Trump, the tongue-in-cheek “girther” movement that believes the president is vainly fudging his vital statistics sees it differently. It’s not fat shaming, it’s hypocrisy-shaming.

It’s ironic that Trump, who has repeatedly hurled weight-based insults at others (including a Miss Universe winner) and got a doctor’s note claiming he would be “the healthiest individual ever elected to the presidency,” is “a whale” even by Homer Simpson’s loose standards.

The Simpsons already had its fingers on the pulse of the Trump presidency back in the ’90s, even predicting “President Trump” in a 1999 episode: