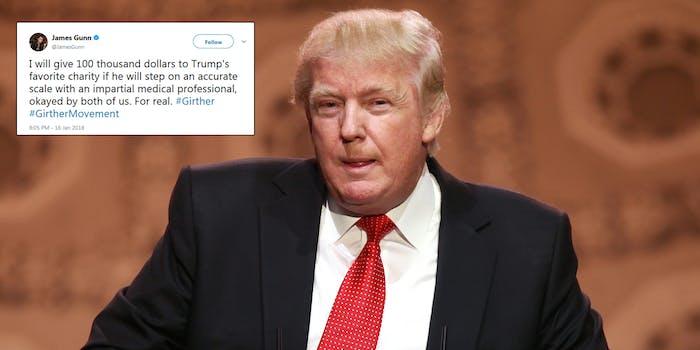 There are a lot of non-believers.

The main criticism, it seems, is that Jackson announced Trump was 6’3″ and weighed 239 pounds, just one pound shy of the level that would be considered obese.

Using a hashtag that plays off Trump’s infamous “birther” movement—where he falsely claimed that President Barack Obama was not born in the United States—the internet let their theories fly.

One of the biggest voices so far of the #girther movement is James Gunn, the director of both Guardians of the Galaxy films.

On Tuesday night, Gunn offered $100,000 to Trump’s favorite charity if he would “step on an accurate scale with an impartial medical professional” agreed upon by both Gunn and Trump.

I will give 100 thousand dollars to Trump's favorite charity if he will step on an accurate scale with an impartial medical professional, okayed by both of us. For real. #Girther #GirtherMovement

Gunn said he did not intend for his offer to be fat shaming, but rather making a push back against “a continuous pattern of fabricating facts by both Trump and his administration.”

Gunn wasn’t alone in questioning the authenticity of Trump’s purported 239-pound weight and 6’3″ height, which is different from what his driver’s license said.

For the record, @realDonaldTrump said he was 74 inches in 2012. Now his doctor says he's 75 inches. And that one inch makes is BMI "overweight" not "obese." I'm a #girther because old men don't GROW an inch! pic.twitter.com/ehNxF9PjPL