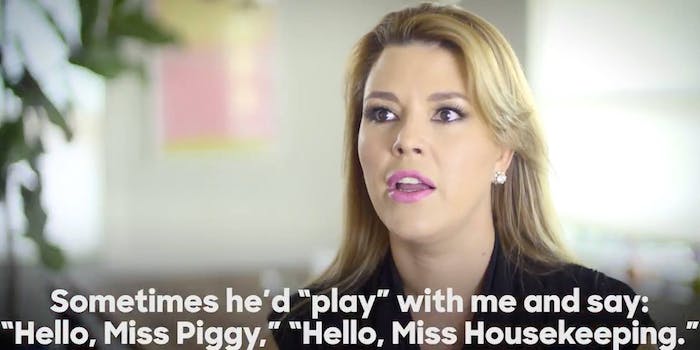 He has a long history of insulting her with names like 'Miss Piggy' and 'Miss Housekeeping.'

Former Miss Universe Alicia Machado, who Donald Trump has called “Miss Piggy,” has thrown her support behind Hillary Clinton for president in a new ad. The video premiered just hours after the debate, in which Clinton used Machado as an example of how terribly Donald Trump treats women and minorities.

But on Tuesday morning, Trump double-downed on his insults, telling Fox and Friends, “She was the worst we ever had, the worst, the absolute worst, she was impossible. She gained a massive amount of weight, and it was a real problem. We had a real problem. Not only that, her attitude.”

The former Miss Universe co-owner has also called Machado “Miss Housekeeping,” because she is Venezuelan, and apparently Donald Trump thinks all housekeepers speak Spanish? He also allegedly threatened to take away her crown in 1996. In a video interview at the time, Trump detailed her weight gain and said, “This is somebody that likes to eat.”

An AP article from January 1997 provides another example of his behavior. The article, somewhat horrifically, reports on Machado’s new workout “before the Big Binge turns her career into a black hole.” “Was she in danger of losing her crown?” Trump is quoted as asking. “There were people in the pageant industry who thought there should be termination,” he answered in his trademark passive style.

In April 1997, she spoke out against the photoshoot of her working out, and said it was Donald Trump’s idea. “He said, ‘This is the perfect opportunity for us to make some publicity for the pageant. Let’s take advantage of this fatty.’” Trump said he put her on a workout and a diet so she could “serve as an example to others.”

“He was overwhelming, I was scared of him,” she says in Clinton’s campaign video. “He’d yell at me all the time.” Machado says the way he treated her led her to develop eating disorders. She also says she was never paid by the Miss Universe organization for the commercials and appearances she made, which was a violation of her contract.

Let’s just be clear that canonically, Miss Piggy is also a model, and was an assistant to a fashion designer in the Great Muppet Caper, and a fashion editor for Vogue Paris in The Muppets. So he basically just compared one successful, beautiful, beloved woman to another.

However, we know that’s not what he meant, but he can have fun answering to the millions of American women who aren’t a size 2.