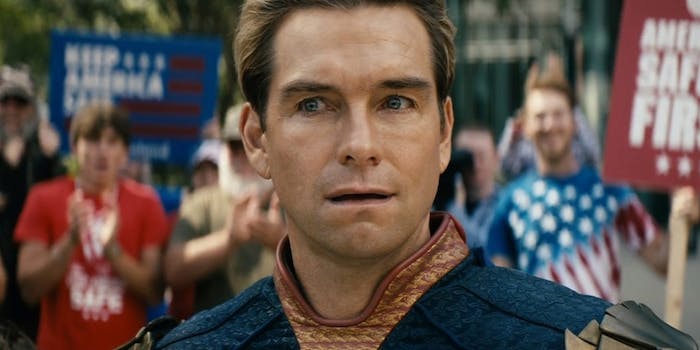 Homelander memes blow up on Twitter after ‘The Boys’ finale

The finale's rally scene was inspired by Trump.

The Boys season 3 came to an end last week, and the finale brought with it a truly chilling meme.

A good deal of season 3’s focus is on Homelander (Antony Starr) as he cleans house at Vought and battles returned ’80s supe Soldier Boy (Jensen Ackles). But one scene from the finale became a meme this week, mostly for what Starr’s impeccable face acting conveys. Homelander has just killed a man who threw a bottle at his son at a rally, and his reaction slowly shifts as the crowd cheers this shocking act.

On July 12, the account callouswayne tweeted out the clip: “Christopher Nolan when the studio allows him to detonate an actual nuclear bomb for Oppenheimer.”

Another popular tweet from torbalderson reads, “when i tweet something out of pocket and nobody unfollows” The clip now has more than 13 million views.

Some people used the clip to critique other superhero franchises.

Season 3 appears to be the most-talked-about yet, thanks to some big, messy scenes and pivotal reveals. The show is also mirroring America’s own bleak political reality; showrunner Eric Kripke told Rolling Stone that Homelander has “always been a Trump analogue for me.” He took that further with the finale, telling Deadline that the rally scene was inspired by Donald Trump claiming in January 2016 that he could “shoot someone” on Fifth Avenue and not lose supporters.

Some fans apparently bristled at Homelander’s fascist turn in season 3. A moderator for The Boys‘ subreddit explained last month that they’ve been dealing with “multiple political threads posted every day that are basically the same topic rehashed over and over again,” including “Right-wingers are finally understanding that the show is making fun of them, they get pissy and complain about the show.”

While anyone could co-opt Homelander for their own ideological purposes, Starr’s reactions really represent something much more universal.