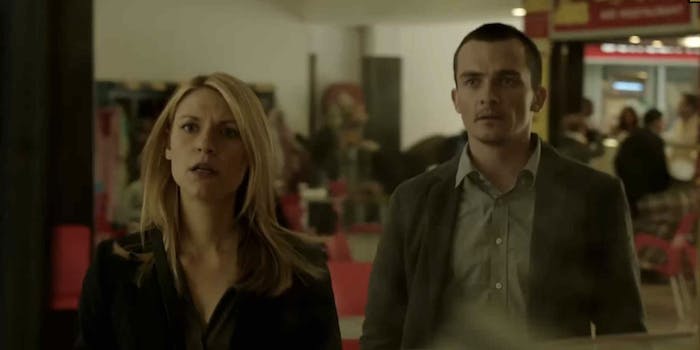 ‘Homeland’ stopped being great years ago—so why is it the most-rented show on Netflix?

Showtime's former phenomenon might not have Emmys anymore, but it still has DVD sales on lock.

Homeland DVD rentals are surging on Netflix in spite of a disastrous third and divided fourth season, a decline in DVD purchasing, and a major jump in online streaming. Are we seeing inklings of a weariness towards supernatural and fantasy programming? Are we reaching a maximum limit of how many comic book-based shows we can handle in one week? Has the unending media blitz of terrorist attacks been made so one-dimensional that we’re desperate for understanding of our government’s tight-lipped operations? In the end, the show’s success is attributable to a little bit of everything.

The Showtime series premiered in Oct. 2011, a mere month after the tenth anniversary of the Sept. 11 attacks. This was a fact not lost on critics, most of whom praised the show for being one of the first programs dedicated to a post-9/11 story, creating something both “politically resonant” and “emotionally wrenching.” The first season bowled over reviewers everywhere. Giddy reviews from top critics cited the show’s stylish and challenging, intense, edge-of-your-seat, steeped in current [reality] take on the spy thriller genre.

Based on the Israeli series Prisoners of War, the first season of Homeland follows the driven but mentally unstable CIA agent Carrie Mathison (Claire Danes) as she begins to suspect that recently rescued POW Sergeant Nick Brody (Damien Lewis), missing in Iraq for over eight years, has been turned into an Al-Qaeda operative. Risking her health, her career, and her sanity, Mathison secretly (and illegally) begins 24-hour surveillance on Brody and his family in her desperate motivation to prove her theory right and stop what could be the next big terror attack on American soil.

Superheroes have been enjoying a comfortable reign over the box office, and this past year saw a virtual flood of comic-book based television premieres. Broadcast networks offered up five new shows: the middling Gotham on Fox; the now-cancelled Constantine on NBC; the CW’s Flash and iZombie; and ABC’s continued expansion of the Marvel universe, Agent Carter. Netflix has not only a miniseries but four more shows based on Marvel characters in the works. Oh, and there’s also AMC’s upcoming Preacher, Cinemax’s Outcast, Syfy’s Ronin and Clone, and lastly TNT’s Titans.

It’s a relief to engage in a story where the good are good and the bad are bad.

Some if not most of these upcoming shows will see success, as we are in the age of superhero idolatry. Truly, as the New York Times declared last year, “we’re all nerds now.” Networks are creating empires out of superhero powers. But it makes one wonder about how much escapism can we handle before we detach too far from our sometimes all-too defeating reality. This isn’t to say escapism is a pernicious idea. It’s a relief to engage in a story where the good are good and the bad are bad—and where evil motives are simple, understood, and easy to defeat.

But as much as we crave fantasy, we crave understanding of the seemingly incomprehensible world of terrorism. Homeland has done just that and will continue to do so, or at least try to, for the veritable future. Showtime’s president, David Niven, noted that even the recent terror attacks will not deter the show’s writers and producers from tackling sensitive international issues. He insisted that such attacks are not and never will be a deterrent in depicting what needs to be shown.

It says something that at a time when we’re seeing an unprecedented amount of supernatural and sci-fi programming lording over television, Homeland, a series rooted in the very real struggle of America’s place on the international stage in the 21st century, is the number-one DVD Netflix renters are gobbling up, tops on the site’s most-rented discs from last August to this January. The show strikes a unique chord with its timely veracity, delving into foreign terror relations as terror attacks across the U.S. and other countries around the world are becoming a no less troubling but all too constant part of the news media cycle. Homeland‘s uncomfortable parallels to real-world events are attributes that amongst today’s highest rated cable shows—like Game of Thrones or The Walking Dead, whose season five premiere in fall of 2014 broke records as the highest rated show in cable television history—is a decidedly more believable, if not unsettling, breath of fresh air.

Homeland’s fictional world is uncomfortably and unsettlingly close to the reality of foreign and domestic operations.

When it comes to Homeland we’re talking about some patient fans. The show still is not available for streaming here in the U.S., while it’s been available to stream in the U.K. back since October 2014. That means an agonizing three to five day wait to get the DVD’s through the ever more aptly named snail mail. It’s even more astonishing when taking into account some of Netflix’s top streaming shows, including the likes of wildly popular and politically-minded House of Cards. Netflix estimated that season three of House of Cards alone would bring in nearly 100,000 subscribers, so it’s not as though there’s an absence of streaming political dramas. Still, viewers are prepared to wait for Homeland DVDs to come in the mail, a strong testament to the show’s popularity at a time when even streaming three-minute YouTube videos tests the limits of our patience.

Homeland’s writers are bent on accurately depicting the secret methods and practices of the CIA. Instead of quickly researching the topic and finger crossing for accurate portrayals, there are actual CIA consultants, like John McGaffin, who stood as head of the CIA Central Eurasian operational division and associate deputy director for operations at the agency. Amidst a few glaringly unbelievable aspects, like having a mentally unstable agent like Carrie Mathison out in the field, Homeland’s fictional world is uncomfortably and unsettlingly close to the reality of foreign and domestic operations.

When asked about its potential veracity, former CIA agents are quick to a thumbs up Homeland’s realism, especially the plot lines of seasons one and two. The penetration of terrorist organizations, the emotional “core” of the war on terror, and government infiltration by turncoats all have the ring of truth and plausibility in the real world of CIA operations. According to one key military official, who was involved in all Middle East foreign policies discussions under the Obama administration, Homeland is “the first television drama that has managed successfully to translate the past decade of war into something both watchable and relatively true to the experience of people actually doing this work.”

Fiction can sometimes be the closest thing to veracity when there is nothing else.

The show, like any other, is not without its controversies. Many top critics, including Matt Zoller Seitz of Variety and Jeff Janson from Entertainment Weekly, criticized the show for its increasing focus in season three on the broken lives of its main characters and distancing of complex political espionage. Season four, starting afresh after Brody’s death in season three’s finale, continued the familial and personal themes through Carrie Mathison’s (still) mentally unstable and even more emotionally detached character. But it made a concerted effort to live up to its spy-thriller description, even if it wasn’t as edgy and hard-hitting as its first season. While seeming to be somewhat back on track, Homeland is still searching for that perfect balance between character study and accurate depiction of post-9/11 American anti-terror actions.

Homeland, for all its guidance from real CIA operatives, its research, and its intense desire to stand as truth, is only a television show. But fiction can sometimes be the closest thing to veracity when there is nothing else. In the war on terror, there is no distinction between right and wrong, between victim and terrorist. Homeland offers us a rare chance of seeing the risks and aftermath of the war on terror. In today’s ramped up terror panic, it’s a rare thing to find.