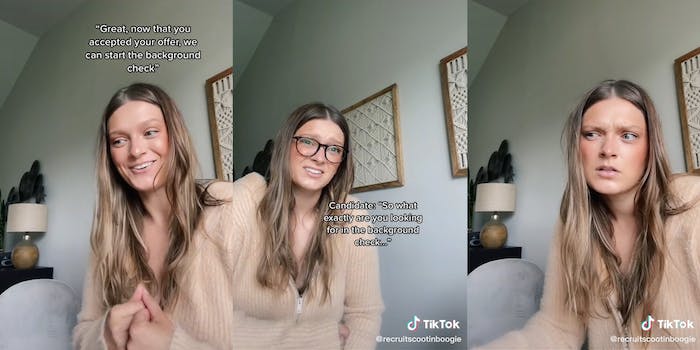 ‘Why did you have to make me sweat like that’: No one knows what companies look for in a new hire’s background check, sparking debate

'I’ve never been in trouble with the law yet I'm always terrified.'

In a viral video, a TikTok account known as Recruit Scootin’ Boogie (@recruitscootinboogie) posted satirical commentary on background checks during the hiring process, sparking debate on the ambiguous process.

“Why did you have to make me sweat like that…,” the caption said.

Recruit Scootin’ Boogie is an account led by a female creator that provides insight into the hiring process, shares great questions to ask during interviews, and satirical commentary on the many facets of job hunting.

In the video, the creator roleplayed as the recruiter and the hiring candidate. The trending TikTok sound used is a mashup of Margaritaville by Jimmy Buffet, with the ‘Law and Order’ theme song attached to the end.

“Great, now that you accepted your offer, we can start the background check,” the overlay text at the beginning said.

After the candidate asked what exactly the company is looking for in the background check, the Law and Order theme song kicked in. The creator behind the account then changed their expression in the video from friendly to suspicious.

“Because…well, I have a couple of speeding tickets…,” the candidate continued.

The ending cut back to the creator metaphorically wiping off sweat from their forehead as if expecting a different answer.

In the comments section, users weigh in on the background check process and debate over the strict rules for those impacted by the system.

“I’ve never been in trouble with the law yet I’m always terrified someone will come up on my CBC. totally irrational I know…,” one user said.

“My co-worker screened a guy who said something silly from a while back might pop up. We googled him & saw he [killed] his neighbor’s dog because it barked,” another commented.

“Hopefully you can start to open up jobs to people who have more than ‘a couple speeding tickets.’ people deserve a second chance, especially for non-violent offense[s],” a third user added.

A few days after posting the video, the creator added a disclaimer to the comments section thread.

“Friendly reminder this account is satire and does not represent any employer or brand — only exaggerations based on stigmas, stories, experiences,” she said.

The Daily Dot reached out to @recruitscootinboogie via TikTok comment.