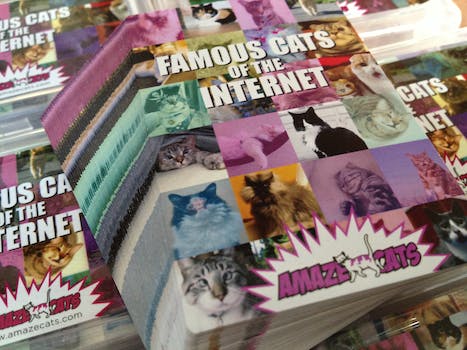 Internet’s most famous cats team up for charity

Colonel Meow, Oskar the Blind Cat and Henri, Le Chat Noir lend their likenesses to a deck of cards that raises money for feline charity.

Any other time, over 10 different cats joining forces would spell trouble. But not in this case.

Amazecats, a site dedicated to letting cat lovers share their love of felines with each other, brought 13 different Internet celebrity cats together for a good cause, including Colonel Meow, Oskar the Blind Cat, and Henri, Le Chat Noir.

The cats’ famous faces will grace a new deck of playing cards, called “Famous Cats of the Internet.” The 52-card deck, which sells for $12, will benefit the Stray Cat Alliance, which helps find homes for stray cats all across the country. “The project came about as a way for the famous cats to give back to their fans while helping their fellow cats in need,” Amazecats spokeswoman Megan Wilkinson told the Daily Dot. “All of the cats’ guardians have been very enthusiastic about the project and eager to participate for such a good cause.”

“Seeing all the famous cats together in one place is really neat, and something that their fans will really love, and will appeal to all animal lovers,” Wilkinson said.

For the past week, Amazecats had teased its fans about the project on its Facebook fan page, which has over 5,700 likes. On Jan. 16, it finally “let the cat out of the bag,” so to speak, and informed its dedicated followers that they can pre-“purrchase” the cards through the Amazecats website. The first orders will be shipped out on Jan. 28.

And don’t forget that Mew-ces are wild.