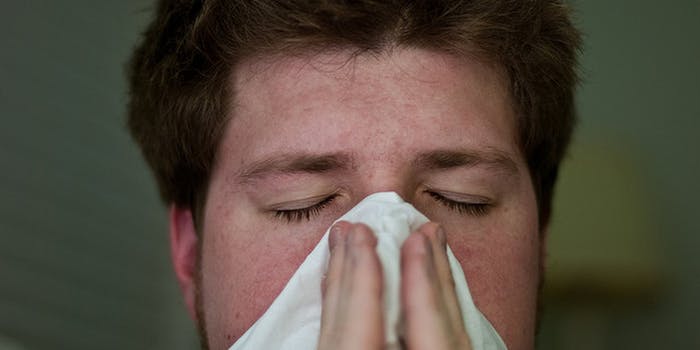 Help, I Have the Flu is the latest from simplistic pharmaceutical company Help Remedies.

It turns out it’s a good week to be my friend.

I mean, I sort of feel that way every week. But apparently this week, it’s particularly good to be a buddy of mine. Despite being in the midst of the worst flu outbreak in years, my 311 Facebook friends are all just fine … or so says a timely new Facebook app that purports to know which one of my friends are (or recently were) infected.

Help, I Have The Flu is a new app from pharmaceutical brand Help Remedies meant to make cold & flu season at least a bit more fun, if in fact it proves less than stellar at combating and preventing the disease.

“The premise is that when you get the flu, you always end up trying to work out who gave it to you,” Help Remedies CEO Richard Fine told the Daily Dot. “This app will help you do that. Hopefully with a certain degree of accuracy.”

The app works by scanning your newsfeed to find out which friends have recently reported flu-like symptoms, locking onto key phrases like “under the weather” and “feeling tired.” The app also looks at social habits (which friends have been to crowded parties recently?) then it cross-references all this information with the list of people with whom you’re most likely to come in contact.

The end result? In my case, the app told me none of my friends were likely to infect me. So my girlfriend who just took a day and a half off work fighting a virus will be happy to hear that. So will all my other friends who, for the purposes of this article, wrote to tell me they actually do have the flu presently.

Perhaps there are some kinks to work out. But as Fine readily admits, the app is meant to be taken with a grain of salt (or perhaps a spoonful of sugar).

“The app is a fun idea,” Fine says. “It’s a great way to raise awareness for our company and for flu prevention, but there is no substitute for just washing your hands.”

The app has definitely raised Help Remedies’ profile. Founded in 2008, the company is meant to be like the Apple computers of medicine—stylish and easy to use. While most generic medicine companies combine formulas and use scientific names, Help Remedies provides single-ingredient medicines in low doses with obvious names (acetaminophen becomes “Help: I Have A Headache” in Help Remedies speak).

The son of two medical professionals, Fine has sought to make the world of over-the-counter treatments less intimidating. The app, though not as helpful as a fever reducer, goes hand-in-hand with that philosophy.

Though specific numbers were not available, Fine said the app has seen a major uptick in growth in the past two days which has translated into significantly increased traffic for the company’s website and Facebook page.

“We’ve been thrilled by the response,” he said. “As more and more people use it, we’ll tweak the algorithm and hopefully make it even more accurate.”

At least someone is having a good week.