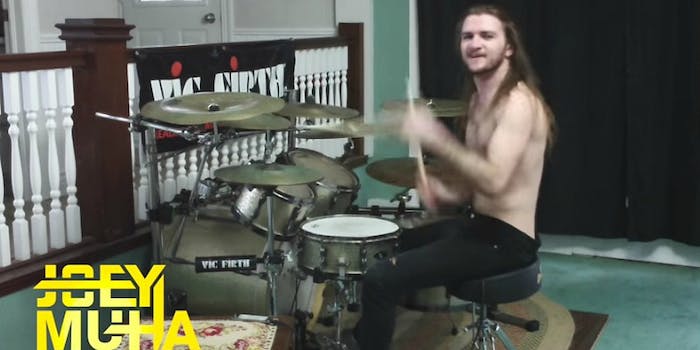 This rocks so very hard.

As we’ve seen many times in the past, a true heavy metal pioneer can make virtually anything rock hard. If you’re truly metal, you can blast through a Shepherd’s pie recipe with growling ease, sync up a metal tune to perfectly accompany your Christmas lights display, or sell the most metal onesies and Frisbees to ever exist.

But the drummer in the videos below, a shirtless lad named Joey Muha, takes it to a different level. To a highly enjoyable, highly METAL level. He plays kids’ songs like “I’m a Little Teapot” and those Oompa Loompa rhymes (which, in retrospect, are perhaps more badass than you would have remembered, even if they remains strangely haunting).

Marvel at how the double bass-drum really brings out the savageness of that little teapot.

Or perhaps you’d enjoy a Disney cover—like “Under the Sea” from The Little Mermaid.

And, of course, here’s one of those timeless tunes from Willy Wonka & the Chocolate Factory.

Make sure to check out Musa’s YouTube channel, where you can watch him thrash to the themes from Gilligan’s Island, MacGyver, and even Pinky and The Brain.

Muha’s next challenge? Perhaps he could go the Dave Grohl route and try a drum-off vs. The Muppets’ Animal.