We want to have our cake and hate it, too. We want to engage in being enraged.

Recently, the Daily Beast ran a particularly troubling op-ed, written by a former inmate, illustrating how Chelsea Manning might fare in prison. It was a sensational piece, constructed around half-baked fantasies, and it was heavily edited after the online uproar began. There was only an editor’s note, which caused more people to click on it.

A Tumblr called Hate Read circulated the full text, pre-edits, and it was passed around on Twitter. The Tumblr’s subhead: “The best way to read that article you don’t want to read without giving them the page views.” For all the hate-sharing and begrudging clicks that happened around that Daily Beast article, it started a dialogue through social media, largely among other writers. Readers formed alliances out of outrage and found other ways to discuss the article.

Hate-reading, hate-clicking, and page-view protesting have created a culture online that pushes back against the outlets that bait us for traffic. Readers fight with the only weapon we have: the choice of whether or not to click on a link, knowing that the page views translate into ad impressions, which mean dollars for the publication.

The problem is, we want to have our cake and hate it, too. We want to engage in being enraged.

“There’s so much coming in, that we only have time to have one of two reactions: hate it, love it,” Hearn told the Daily Dot via email. “We have so much coming at us, we have to decide quickly whether we can accept it or reject it. And when we reject it, it’s often with a vitriol that we don’t show in our daily lives. It’s just that there’s so much information. Our brains seem to be protecting themselves this way, to the detriment of the community.”

In this current culture of click-baiting, there’s a subculture that’s attempting to curate hate reads. In addition to the Hate Read Tumblr, there’s also Hate Reads. It’s on Twitter, too: The account Hate Reads collects especially vexing articles, tagged with #hatereads or #hateread. There’s the Bile, and its attendant Twitter account, which collects daily hate reads.

A degree of dialogue and criticism is crucial to hate-reading, but is it doing us any good on a cultural level? Mat Honan, a senior writer at Wired, created the Hate Reads Twitter account. He shares curation duties with a few other “concerned readers.” He said it’s not exactly beneficial, but there is something cathartic in common outrage, in the mutual enjoyment of hatred.

“Most of the people I see hate-reading, whether they call it that or not, work in media and more specifically Web publishing,” he wrote to the Daily Dot. “The nature of our jobs is that we have to read lots of stories every day. And because publishing lots of stories is one sure way to drive traffic, there is a hell of a lot to read every day. Most of that is not bad, it’s just boring. It’s just disposable journalism.

“So when you come across something that breaks through that deluge, something that’s not just boring or banal or sloppy but awful enough to provoke an emotional reaction, perversely the odds are that story will be one of the most interesting things you’ll read all day. And so then you just want to share this interesting thing you’ve found in a sea of boringness with your friends so that they can have an emotional reaction too.”

There is no such goddamn thing as weird Twitter. https://t.co/yZ3LUAa2xr #hatereads

Within that community, hate-reading can lead to acceptance or understanding. It can be constructive in the search for a common enemy and help us feel less isolated. 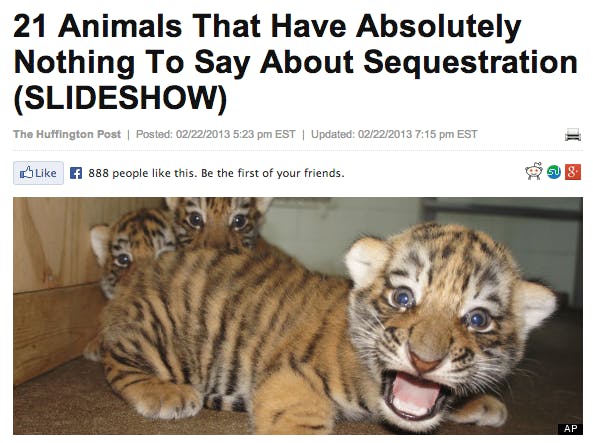 Listicles, slideshows, and hate-reading often go hand-in-hand. Articles like L.A. Weekly’s infamous “The 20 Worst Albums of the ’90s: The Complete List” or Huffington Post’s bizarre “11 People Who Totally Count as Latino” are all arbitrarily ranked culture stews that trade you low-engagement amusement for repeated clicking.

These lists are not always harmless. A recent post in BuzzFeed’s “community” forum, titled “8 Outrageous Things Planned Parenthood Was Caught Doing,” illuminated a new trend: right-wing groups co-opting listicle culture to spread their political agenda and, in this case, misinformation.

Some hate-reads are a little more insidious.

That expressed itself most recently via the launch of Bustle, which inspired an armada of hate-clicking after founder Bryan Goldberg, formerly of the sports site Bleacher Report, announced on PandoDaily that he’d created a website for women. He reasoned that before Bustle, there were no websites for women that combined fashion, lifestyle, and news. (He hadn’t considered Rookie, Jezebel, the Frisky, xoJane, or the Hairpin, for starters.)

The Bustle launch also resulted in many excellent pieces from even more women’s websites, dissecting why exactly his “announcement” was so enraging. The troubling part of Goldberg’s self-centered launch of a website for women, and his equally clumsy mea culpa two days later, was that he might have stumbled onto a foolproof method for getting people to hate-click their way through his new site.

Still, as Honan said, there is value in that emotional response to an article, and building a progressive culture around it.

“It’s kind of like watching a cult film in that regard,” he wrote. ‘This is so awful, you have to try it so we can enjoy hating it together.’”

That collective outrage can be a force, if used correctly. More importantly, it could improve the climate of Web publishing, combatting disposable journalism and pushing writers and editors to engage more critically and thoughtfully, finding a space between “love it” and “hate it.”