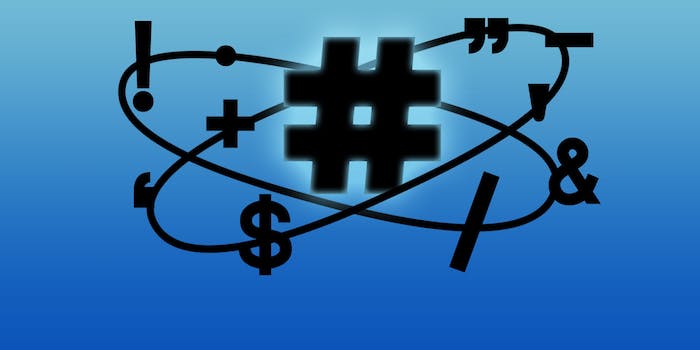 How punctuation is killing the hashtag

Many useful symbols are banned from hashtags. It’s time we get concerned about the future of social media.

As a young man growing up in East London, I naively believed that everything could be attached to a hashtag, including buildings, emoji, even aftershaves. Why not tag—verbally, physically, mentally—all the time? I tried to.

Alas, now that I am almost 30, the awful reality of the limited “#” use has dawned on me.

No matter how evolved mankind and science have become, some keyboard characters will never fit certain digi-areas of our lives. See below for the depth of the problem. It’s a shame, and it goes to show how closed-minded and numb the system and its creators were. Why ban the variety of content one wishes to define as a topic? Unfathomable.

First of all, the hashtag itself is not hashtag-able. You cannot put both # and # together and expect to click on it. It won’t work. Travesty. In an ideal world a hashtag made of hashtags would be elementary. Many of my friends wish to tag themselves tagging themselves. They’d also like to use the # after # in Web addresses and other code forms and that are simply forbidden. I’m not sure whether it’s neglect or malpractice.

Underscores just underline the crux of the problem. Why is a random underscore, something that no one ever types in real life, somehow better than a dash? A dash is higher, smaller, more efficient and neat, yet is not included in the hash-permitted keys. Without rehashing the point, making the dash as marginal as a (/), (<), or a (‘) is a huge error. Not to mention dots. If dots are allowed in email addresses, why can’t they be used in @handles and in #? So random.

#ChrisO‘Dowd almost passed on #Calvary, because he thought it would have been critical of the priesthood https://t.co/5COQGjBQqm

The ban on question marks made it impossible for TV shows to have questioning titles. No more Would I Lie to You? or Who Wants to Be a Millionaire? On the bright side, there are also no shows with exclamation marks, and the smart ones tend to have fewer words in the title. #TheVoice showed us how a simple two-worded unquestionable hashtag can become a top topic. Initial hashtags (re: #TOWIE in the U.K.) are becoming a thing of the past.

The ampersand has confused many One Direction fans, as they typed #You&I again and again last week, just to find themselves tweeting “#You,” without “I,” since the hashtag stopped functioning after (and including) the &. Obviously they ought to have used “and,” but the band specifically put “&” in the song’s official title. Many Directioners, justifiably so, refused to change it to the unofficial “and.” “You and I” is pretty much a different song for all intents and purposes.

Chris Matthews’ book, Tip and the Gipper, was also a tag fail:

I long for the day that links could be made of emoji, as well as passwords and ATM codes. Letting emoji slip through the strict hashtag-allowed-characters-regime would be a brilliant start. It’s essential to know who used the (hashtag)needle-emoji a few minutes ago, or at any given time, just like the emoji tracker relentlessly shows us which emoji are being typed.

Too many bad movie titles with dollar signs in them, or anything else with money signs, including all money signs in the world, are completely off-limits and excluded from the # discussion. Like this Michael J. Fox film:

Suppose my sister wants to hashtag emptiness, and leave the space clear after the #, using the space bar. Why is that not considered a trending thing to do? Space creates screen real estate that is just as clickable as any other character. Some would suggest that allowing spaces within hashtags will interfere with our ability to know where they start and end. So be it. Maybe it’s time for these unique tags to outgrow us and swallow spaces, commas, other hashtags, dots, everything.

Affirmative action by ICANN would be necessary in this case, similar to Apple trying to fix emoji ethnicity issues. It should be self-evident to everyone that the arbitrary selection of signs that obtuse programmers have chosen to permit after the # is hanging so many others out to dry.

This article is dedicated to @laura_k from Tigercats (band).

.@jimmyfallon owes me credit for the finger hashtag: https://t.co/LDHTARlS9L pic.twitter.com/1GSotsQSy3