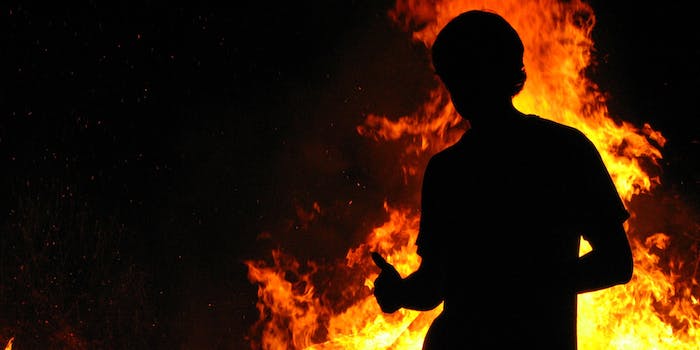 Hashtag activism makes us all feel good about accomplishing nothing

Does the thought really count?

Four recent, trending hashtags. Four causes worth speaking up for. But ultimately these hashtags represent problems that are still rampant and unsolved. Once the trends died, the Internet media scuttled off to cover the hamster eating a mini-burrito and varying objects that appeared to be vaginas but were, in fact, not vaginas.

Before you enter a state of vituperative, social justice-fueled rage, don’t misunderstand what I’m trying to say.

#YesAllWomen brought crucial issues about the unceasing, dehumanizing, horrific struggles women face every single day to the fore on a massive scale. #SurvivorPrivilege showed insensitive conservatives that there’s no such thing as “rape privilege,” and that even entertaining the existence of such a thing for a microsecond is insanity. The hashtag showed the ugly, realities of a post-rape life. Rape is an ever-present threat for women—especially on college campuses. Even worse, colleges prefer to cover up the rapes, and society at large tends to blame the victims. #NormalizeBreastfeeding reminded us that much of the country still shames a basic biological function. #WhitePeopleEquivalents demonstrated that the society we live in is anything but post-racial.

But what is all that ultimately worth in the face of continued, unbridled, and seemingly mounting injustice? Screenwriter Shonda Rhimes surmised her thoughts on the issue:

Rhimes took a considerable amount of heat for her words. According to critics, hashtags and awareness, like the kind promoted by Anonymous, were crucial in altering the national discourse and therefore implementing changes in the way the world works. Ben Scott of New America put it more pedantically:

Hashtag activism’s most important function is to divert public attention to new subjects, and in ways that stir conviction. It contributes to a process of ‘agenda setting’ that drives the news media. The media you consume may not dictate your views, but it does focus your attention by elevating stories and topics. It tells you what to think about and what is important. Pre-Internet, elites, and major media outlets performed this function. Today, hashtag activism is a form of agenda setting in which regular people may participate and lead—and sometimes excel.

Scott goes on to cite #BringBackOurGirls as the zenith of the hashtag activism craft. The hashtag dominated the media to the point where even Michelle Obama supported it.

But then what? Nothing. The media wrung out the page views and moved on. Who cares though, the ever-nebulous concept of “awareness” was raised and we can all go home happy, right? No. The girls still haven’t been found.

“But then what” is what we should ask about every trending hashtag. #YesAllWomen taught us how the world is literally always out to get you when you’re a woman. But then what? #SurvivorPrivilege showed the world’s ignorant that there’s no privileges to be had when your consent is violated. But then what? #NormalizeBreastFeeding pointed out the hypocrisy in glamorizing sexualized actresses but shunning and shaming real women who do real women things like breast feed. But then what? #WhitePeopleEquivalents rightly displayed the aloof, blithe unconcern white people have towards issues of race. But then what?

Awareness is, obviously, a necessity. If nobody knows about something, how can they fix it? But raising tons of awareness means nothing if there’s no action.

Hashtag activism, at best, is a way for an issue to enter the Internet’s discourse for as long as the topic can generate page views. At worst, it’s a way for lazy Internet writers who generally peddle shitty, brain-dead listicles to spit out a few tweets bearing the hot hashtag and proclaim themselves a difference maker—a way for websites to pick up some cheap traffic while contributing fuck all to the solution.

Matt Saccaro has contrbuted to Salon, Thought Catalog, Medium, and BuzzFeed. He’s the author of the ebook, Sex, Lies, and Scantrons, as well as an ebook about U.S. diplomatic history.