Prompted by modern philosopher Alain de Botton, the One Direction singer started dropping some philosophy on his 10 million Twitter followers.

What do you get when you cross modern philosopher Alain de Botton with one of the biggest names in pop music?

20,000 retweets and a lot of people—including One Direction heartbreaker Harry Styles—talking about Socrates.

Known for his ability to distill complex philosophy and literature into bestselling pop psychology works like How Proust Can Change Your Life, the U.K-.based Botton gave an interview to London’s free newspaper, Metro, in which he naturally recommended that more people consume and disperse the teachings of philosophy. And one of the people he called out was none other than Harry Styles, the most famous member of the world’s biggest boy band.

Under the guise of promoting his new book, Religion for Atheists, Botton mused that “people such as Harry Styles” could benefit society by “[recommending] to everyone they read Proust and Hegel, which would achieve more in five minutes than the Arts Council achieves year in, year out.”

“In an ideal world,” he added, “Harry Styles would be teaching his 10 million Twitter followers a little more about Greek philosophy.”

The Metro published the interview by highlighting its reference to Styles, knowing it would get tongues waggling: 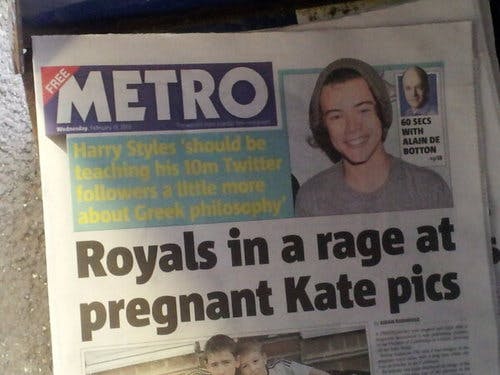 Among the readers tuning into the interview was apparently Styles himself. Without context, but clearly referencing the Metro article, earlier today Styles tweeted, “Socrates, born in Athens in the 5th century BCE, marks a watershed in Ancient Greek philosophy.” 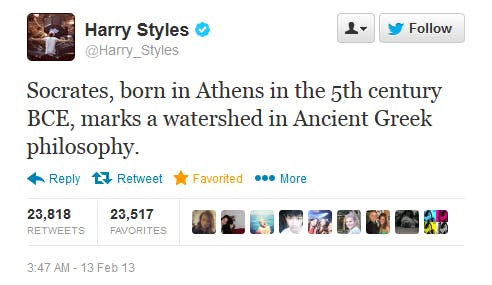 The whopping number of retweets–over 20,000 and counting–and Tumblr reblogs indicates Botton was on to something. No word from Styles on whether he intends to continue educating the masses, but we’re pretty sure there are lots of Larry Stylinson shippers who’d really like to know what Harry’s thoughts are on the, er, racier parts of Plato’s Symposium. And that’s all we’ll say about that.

Meanwhile, Botton insists that Styles has a leg up on Britain’s cultural art institutions. “On the one hand,” he told the Metro, “you’ve got people saying culture is getting dumbed down. On the other you have people saying you have to do lowest common denominator stuff. I’m trying to build a bridge between what’s serious and what’s popular.”

It looks like he’s off to a bloody good start.