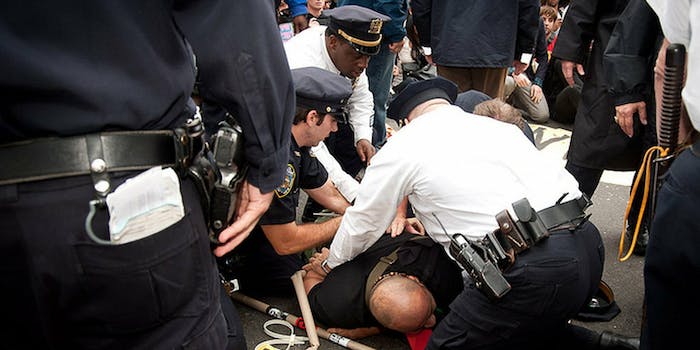 Hackers expose private information of law-enforcement personnel—and may have more to release.

On Friday and Saturday, AntiSec, a splinter of the hackivist group known as Anonymous, released more than 600 megabytes of sensitive law enforcement information, in retaliation for police actions taken against Occupy Wall Street protesters.

Occupy Wall Street protesters have faced mass arrests, and in some instances, were pepper-sprayed or had their tent cities removed by police in their perspective cities,  such as Boston and San Francisco.

The law enforcement documents released on Friday and Saturday include Social Security numbers, phone numbers, addresses, and even passwords for personnel. The release was aimed at the Boston, Massachusetts, and Birmingham, Alabama police departments as well as the International Association of Chiefs of Police (IACP) and the Matrix Group, a development group specializing in government websites.

The leak was planned in time for IACP’s annual meeting on October 22, the same day as the National Day of Action Against Police Brutality. The IACP website went down on Friday, and stayed down throughout the weekend until Monday.  In two press releases, AntiSec stated their motive as solidarity with the Occupy Wall Street movement, which has spread beyond lower Manhattan to several major cities across the United States.

But the best — or worst, depending on who you ask– has yet to come, said a member of Anonymous, dubbed “DMC” for the purposes of this article.

“Typically, it is ‘teasers’ up until the main release,”  DMC said in a private chat with the Daily Dot.  Clearly, he was inferring that  this release was merely a “teaser,” but he did not elaborate on what else AntiSec has up its sleeves. He did add, however, that “the public releases are usually misdirection, a slight of hand…”

DMC, who asked that his usual online moniker not be used for this article, was tapped by AntiSec as a data-mining consultant for the most recent “raid” on the police databases and websites. DMC was vague on his exact involvement, or what information he provided while consulting, but did add that he “makes things happen.”

But DMC added he was only indirectly involved with the latest police raid.

VentureBeat wonders if the documents had been “leaked” one day ahead of time by an unruly anonymous member, as the documents were released on the 21st, a day before the conference.

Actually,  the group as a whole decided to release the documents a day before the conference, “to disseminate (them) more quickly,” DMC said.

DMC also addressed Gawker’s comment that AntiSec was holding a “grudge” by attacking the Birmingham, Alabama police department for police brutality committed over 50 years ago during the civil-rights era.  “There’s a bit of dick wagging, sure” DMC said.

In other words, AntiSec did it just because it could. Or as DMC put it, “people are going to do whatever they can do.”

Is this type of hack necessarily effective, though?

The released information would make the police and their families vulnerable “to any criminal that has a vendetta against them,” a nurse named Greta Martin commented on VentureBeat.

“I can’t see this helping the [Anonymous movement’s] image.” commented fakeptv, on the YouTube video of the British man taking responsibility for the Birmingham hack.

Occupy Boston protesters, meanwhile, told the Boston Herald they did not enlist Anonymous’ services and were afraid to “publicly criticize the powerful shadow group, saying they didn’t want their own emails hacked.”

“It is of no consequence how effective it is in the public eye,” he wrote.

Despite the negative online reactions, DMC believes the hack, or “data extraction” as DMC prefers to call it, was effective — ultimately,  “it [got] the public’s attention” and made “the mark look bad.”