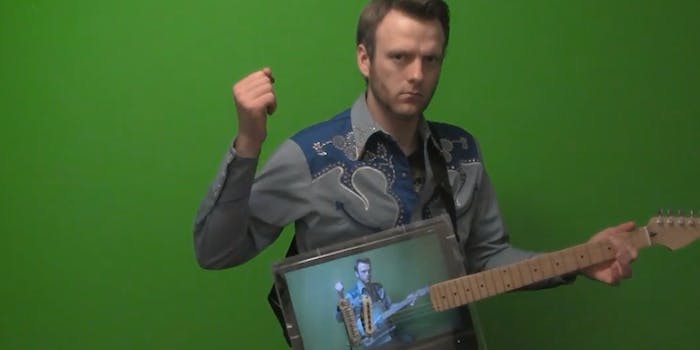 The guitelevision is the world’s greatest most pointless instrument

Now people can watch your guitar to watch you play guitar.

Is it a guitar? Is it a television? It’s really kind of both: a guitar that’s made out of a television, and it’s just strange enough to exist mostly on YouTube.

The man behind the invention is Cyle Ziebarth, a Grants Pass, Ore., native who plays lead guitar in the Stillwater Prophets. He’s a big Seattle sports fan who’s also into “guitars, motorcycles, video making, and absurdity.” Three of those four interests manifest themselves within the item he’s best known for: the guitelevision, a fully functioning guitar that’s also a fully functioning TV.

The TV component’s a little misleading. Presumably, considering the collection of YouTube video’s Ziebarth has posted online, the guitelevision’s TV operates on somewhat of a closed circuit network, transmitting recordings taken right there on the spot. But it’s certainly strange.

Ziebarth’s a big fan of surf rock, obviously, and jean jackets and mustaches. Even when he covers Nine Inch Nails, as he does below with his rendition of “Head Like a Hole,” he’s channeling Dick Dale.