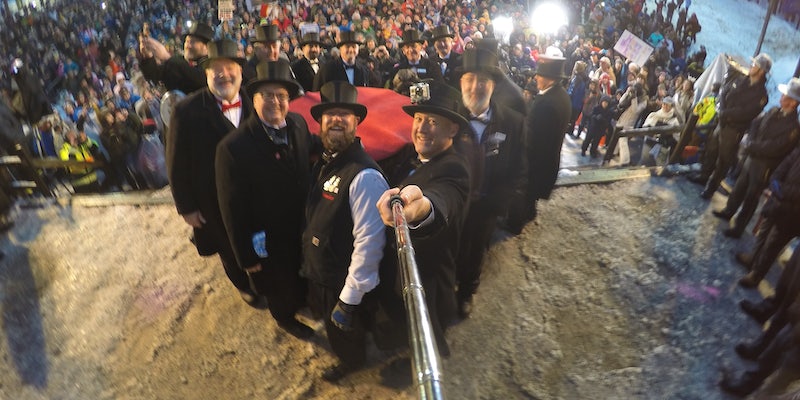 Americans must be deep in the throes of collective depression about the state of meteorology in the winter, because we’re once again taking weather advice from a groundhog who just wants to go back to sleep.

Feb. 2 marks Groundhog Day, when we pull helpless creatures out of their homes and demand that they tell us when spring will come. Seeing as how we don’t live in Westeros, the seasons seem to change at a regular pace no matter what our groundhogs say. That hasn’t stopped us from consulting them, however.

The most famous groundhog, Pennsylvania’s Punxsutawney Phil, has an especially important job. It’s basically all on him to decide this matter, and each year, his human overlords force him to do so at the crack of dawn. This year, Phil determined that we’re getting six more weeks of winter.

#PunxsutawneyPhil in all his glory as he announces six more weeks of winter. #GroundHogDay pic.twitter.com/dc0ti99eul

Proving that even Punxsutawney Phil knows what’s hot with the kids these days, the groundhog and Pennsylvania officials celebrated the occasion with a topical hashtag and a selfie taken by selfie stick.

At least it went off better than last year’s Groundhog Day.

Phil’s prediction should come as no surprise to residents of Chicago. The city just got 19.3 inches of snow, making this the city’s fifth largest snowstorm on record, so it’s pretty much impossible to avoid the presence of winter right now.

Groundhog Day is a proud tradition rooted in ancient European weather lore (in some retellings, the original weather creature was a badger, not a groundhog). The ceremony even has links to the Christian holiday of Candlemas. Songs foretell what the groundhog will later demonstrate: If it’s sunny that day, winter will stay; if it’s cloudy, spring will come early.

Of course, that was before modern-day forecasting and the ability to scientifically predict each day’s weather. And while meteorologists still get it wrong occasionally, it’s comforting to know that Phil does too.

Not every city trusts Phil’s forecasting. Many communities install their own groundhog forecasters to do the predicting for them. Cumberland County, N.J., used a coatimundi, while Staten Island Chuck is sure to disagree occasionally with Phil from Manhattan.

Forget #groundhogday. What did the coatimundi in #Bridgeton decide? http://t.co/to3IhJHoyC

Phil may not be alone, but he’s by far the most famous Nostradamus of his kind. Many of his fans invoke Groundhog Day, the Bill Murray movie that forces him to repeat the holiday over and over and over again, but there are plenty of other jokes to be made about a groundhog that, at times, may be a better meteorologist than TV’s finest.

"Ok, campers, rise and shine, and don't forget your booties 'cause it's cold out there today" – happy #GroundhogDay! pic.twitter.com/GfqqXK23ml

Get ready for 6 more weeks of this. #GroundhogDay pic.twitter.com/eZipg7zce9

Happy #GroundhogDay, everyone! Hope it's going better than Phil's. pic.twitter.com/HptvQLDb3R

Watch out for the first step, Internet. It’s a doozy.