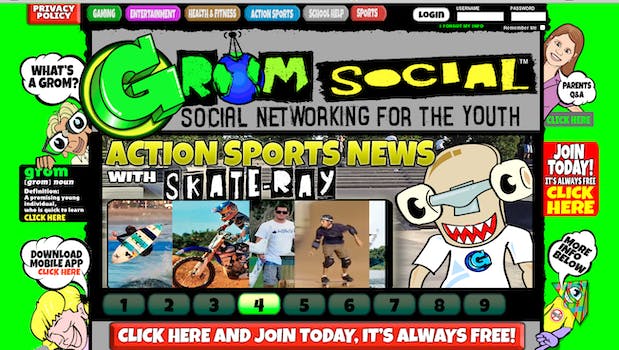 Did an 11-year-old really build his own social network?

Grom Social, a Facebook competitor for kids too young to use Facebook, was supposedly created by an 11-year-old. But how much of it did he really build?

A year from now, Grom Social will no doubt look back at January 2013 as the month it made a big splash. The site, which bills itself as “social networking for the youth,” has been favorably covered by various media outlets. But what has compelled publications like Salon and MediaBistro to create such a positive buzz for a social network platform that only boasts 6,800 users?

According to company lore, 11-year-old Zachary Marks really wanted a Facebook account. He asked and pleaded with his dad to let him set one up, and after much insistence, the latter relented. Despite being two years too young by Facebook’s age requirements, Zachary created his own profile. He was immediately addicted.

But then he got out of control.

“One of my adult friends cursed and posted something inappropriate, and I cursed back,” Zachary writes on The Grom Social Story, a page meant to serve as an “about us” section for the site.

“Also, I friend-requested grown ups who I did not know. About a day later, my dad found out. He was really mad. I had to deactivate my account. Then, I was really mad.”

Instead of being sans social network, Zachary set out to build his own when he couldn’t find one that catered to his demographic.

“I began looking for a kid’s social network that was safe and cool. I did not find any that looked interesting to me. They were all childish,” he noted.

“So, I began thinking. That night, the idea came to me. I could create a social networking place for kids that was cool with sick graphics. I added a bad word filter and we do not allow adults to join unless they are friends or family.”

The site, which takes its name from surfer slang, is compliant with the Children’s Online Privacy Protection Act, federal legislation that restricts and regulates how online sites collect the private information of minors. Grom Social requires that a parent or guardian verify a child’s account via email before it’s created. The site keeps a parent’s email on file so as to provide them with updates and disclose what information their child has shared.

In addition to being a social network, Grom Social also offers educational and nutritional information.

As previously mentioned, the site has received nothing but praise. In fact, a lot of the positive write-ups have made the obvious comparison to another individual who started his own social network at a relatively young age.

“Is this the next Mark Zuckerberg?” asked the New York Daily News.

One social business consultant even went so far as to claim that Grom Social is a threat to Facebook.

“As membership grows and Grom Social reaches the tipping point with its members, more and more teenagers and pre-teens will turn away from other social networking sites such as Facebook and join their friends on Grom Social,” speculated Eileen Brown on ZDNet.

“Then, without the influx of youth, Facebook growth will stall as its value to the next generation diminishes.”

At the risk of sounding like a contrarian, this reporter is not buying it.

It’s not that I don’t think that someone so young could build a social network from scratch. Quite the contrary, precocious children and teens have shown time and time again that they’re capable of being exceptional in the tech world. One only needs to look at the likes of the recently deceased Aaron Swartz, who at age 14 accomplished more than most do in a lifetime. There’s also the case of Cosmo the God, a hacking wunderkind who is currently banned from the Internet for his role in stealing hundreds of thousands of credit card numbers.

My skepticism is rooted in the notion that there’s little to no proof that Zachary Marks actually created Grom Social himself beyond the aforementioned origin story on the site.

It’s not out of the realm of possibility that Marks did have the idea of making a social network for kids, but is that the definition of creating something?

In the video embedded above, Darren Marks, Zachary’s father and COO of Grom Social, speaks in depth about the site. At one point in the clip, the elder Marks mentions that Zachary sat down with a web developer employed by his company to actually build the Grom Social’s framework.

As per Zachary’s actual involvement with Grom Social, Darren Marks told Florida Today that the pre-teen and the rest of his siblings are in charge of the site’s “creative side,” but did not explain what the kids’ exact responsibilities are.

From the site’s team page, we can ascertain that Zachary and the rest of the Marks children at least have some help in the creative department. Grom Social employs a graphic designer to assist with how the site looks and feels.

The youth-oriented social network also boasts a marketing specialist, so it’s unlikely that young Zachary is behind getting the Grom Social name out there. Oh yeah, and there’s also an executive board filled with individuals with years of experience in finance and marketing—including Zachary’s father, Darren Marks, founder of an energy drink and food company—should raise some questions.

In 2005, Pino Audia, a professor at Dartmouth’s Tuck School of Business, penned a piece titled “A Garage and an Idea: What more does an entrepreneur need?” The article explored the “garage belief,” a symbol that “conjures up some common images of entrepreneurship, including … the freedom of working for oneself.” It essentially looks at the origin stories of various companies like Hewlett-Packard and Apple, and how these feed the myth.

Zachary Marks as the originator of Grom Social is the site’s garage. After all, who doesn’t want to believe that a young entrepreneur pulled himself up by his bootstraps?

The Daily Dot has reached out to Grom Social on multiple occasions, but no representative has responded to our requests for comment.