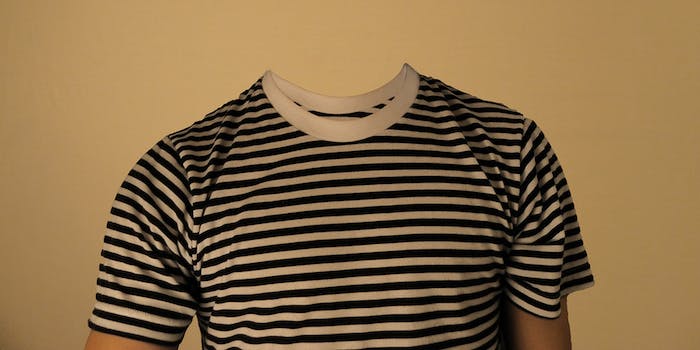 Is Grindr putting gay men back in the closet?

Here's what your headless torso says about you.

I know, there seems to be a new openly gay celebrity with every news cycle. We can serve openly in the military. We have openly gay basketball, football, and soccer players. We have openly gay billionaires. We have Anderson Cooper. We have fought hard to tear down the walls of our closets, and it wasn’t easy. When Joan Crawford wanted a wall gone, she could turn to Al Steele and tell him to “tear down that bitch of a bearing wall and put a window where it ought to be.”

Joan had it easy. Tearing down the wall of a closet is a tough and often slow process. That’s certainly what it was like for me. The first time I came out was to my high school English teacher—in a school paper. You might call this brave. I called it an easy A.

And whatever bravery I felt in those youthful moments of lucidity evaporated as I returned to the comfort of my closet soon after. I came out to most of my friends in college and to my parents in my mid-20s.

The act of leaving the closet took me many difficult years, but it left me a much happier person. As anyone living a secret life can attest, life in the closet is cramped and lonely. There’s only room for one person in there. Which is why I find it so surprising that I, and so many gay men who battled to come out, have stepped right into a new closet.

It’s a virtual closet, populated by a series of websites and apps where men go to hook up. These sites allow gay men to step right back into the comfort of secrecy. I should know. I’ve spent a good deal of time there, safe in the shadows. Perhaps the most popular of these apps is Grindr. Log into Grindr and you will find that a large number of profiles consist of photos of headless torsos, faces literally guillotined by men who would rather their identities remain unknown.

A while back, the people behind Grindr launched Blendr, the heterosexual counterpart to Grindr. In the interest of cultural anthropology, I decided to sign up for Blendr and get a taste of what looking for a hookup would be like if I were straight. I was immediately taken aback when asked if I was there to (a) Make a New Friend (b) Chat or (c) Date. Where were the other options that offered me carefree hookups with somebody in an open relationship?

The differences didn’t stop there. The profiles included personal details that would rarely find their way onto a gay hookup app. One man included “chilling, comedies, and chicken” as his interests (truth be told, most people on Grindr are interested in chicken as well). One woman listed Bread and Celine Dion as interests. Carbs and Canadian pop stars. This was a far cry from the headless torsos on Grindr.

And that’s when I went all Oprah and had an a-ha moment. It struck me that every single profile on Blendr had a picture of somebody’s face on it, and they weren’t heavily airbrushed headshots either. A sad truth emerged: Straight people don’t crop their heads out of profile photos because they aren’t ashamed to be on the app in the first place.

Many years ago, I met a guy on Manhunt. We dated for a few months. When I was introduced to his friends, they asked how we met. He concocted an elaborate story about a party at which we supposedly met.

Our romance ended soon after, perhaps overburdened by the weight of this lie. I know other gay men who met on hookup apps who have a backup story of how they met. Often, they tell their gay friends the truth, while saving the fiction for heterosexual friends and professional contacts. Why not come out of the shadows and show our faces? Perhaps if we did, we would be kinder to each other in the process. Anonymity is often a facilitator for cruelty, as anyone who reads the comment section of just about any website can attest to. On hookup apps, anonymity leads to requests for “No fats,” “No fems,” and “No Asians.” Would people be so exclusionary if their faces and identities were attached to their words?

Last summer I broke up with my partner of five years and coped with my newfound single status the way any modern person does, by turning to OKCupid, Tinder, and a host of other dating apps.

I couldn’t resist the lure of Grindr, but this time I stepped out of the virtual closet and posted a photo of my face along with some personal details. Entering the online dating world as a single father is a new and fascinating experience. It has led to some amusing and awkward moments, like the guy who thought I had two dogs when I described myself as a father of two. Or the guy who asked if I was ready to get married before ever meeting me in person. And yes, many friends and professional contacts have probably seen me “looking.”

Bringing my personal life into the virtual closet can be uncomfortably intimate. But it’s also nice to feel that all my worlds are integrated. To all the headless torsos left out there, I say make like Harvey Milk and “burst down those closet doors once and for all.” Show your face on Grindr. Tell your straight friends you met your partner on Manhunt. Regale your coworkers with tales of your latest conquest. The time has come for us to break down every closet door. After all, who doesn’t love an open floor plan?

Abdi Nazemian is a screenwriter and the author of The Walk-In Closet. He and his children live in Los Angeles. Follow for more, visit Abdaddy.com or follow him on Twitter @Abdaddy. This article was originally featured on The Advocate’s website and reposted with permission.