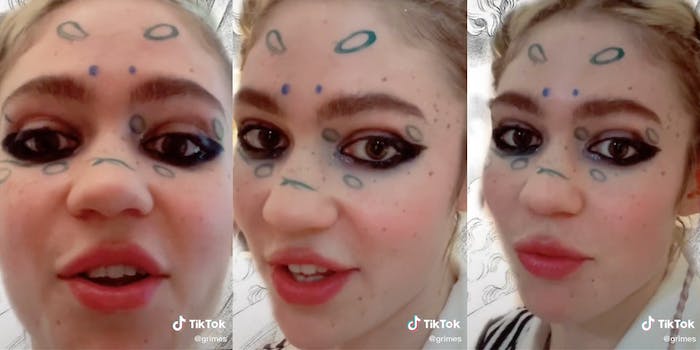 Grimes trends thanks to her TikTok about AI and communism

Grimes returned to TikTok earlier this year, and her most recent video quickly went viral, mostly because people aren’t quite sure what she’s talking about.

“I have a proposition for the communists,” she begins the TikTok, which now has more than 1 million views. She goes on to say that “AI is the fastest path to communism,” and tries to convey how that would play out in terms of automating farming, going as far as saying that AI could get us to a point where “nobody has to work” and we arrive at “genuine equality,” though she doesn’t provide any real specifics.

She ends the TikTok by saying, “Enforced farming is really not a vibe.”

Well, that part is certainly true!

It’s a lot. And considering Grimes is dating Elon Musk, a billionaire and CEO, this “proposition” seemed a little tone deaf.

Grimes has long been enamored with AI, even before Musk, but in response to a comment on her TikTok calling her out for dating a man who’s obviously a capitalist, she claimed the video was a “joke” and that she’s “not a communist!” Though, she added, “maybe the technocrats and communists could get along!”