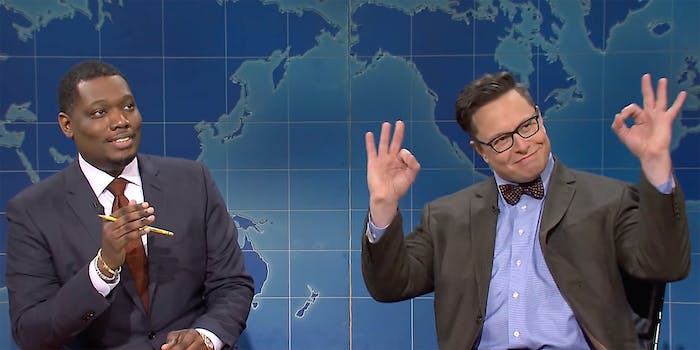 One user even wished for Musk's death over the segment.

The Tesla CEO, who was portraying a character referred to as “Financial Expert Lloyd Ostertag” on a segment of Weekend Update, was seen using the “OK” hand gesture while discussing cryptocurrencies.

The hand sign, which has long been used to indicate well-being or approval, has become a contentious issue after the Anti-Defamation League (ADL) declared the gesture a hate symbol in 2019.

But those who disagree with the classification note that the connection between white power and the OK hand sign first arose as part of a prank by members of the notorious message board 4chan.

The prank was aimed solely at tricking progressives into believing that everyday gestures, including the OK hand sign, were actually secret symbols of white supremacy.

The ADL argued that although the issue began as a prank, some white supremacists later joined in on the trolling campaign, leading the organization to classify the gesture as potentially hateful.

The group stressed, however, that the “overwhelming usage” of the OK hand sign remains tied to its traditional meaning.

“As a result, someone who uses the symbol cannot be assumed to be using the symbol in either a trolling or, especially, white supremacist context unless other contextual evidence exists to support the contention,” the ADL said.

But some Twitter users are convinced that Musk, who is no stranger to controversy, clearly used the symbol in a hateful manner.

“Elon Musk did the white power hand gesture during weekend update,” @ronaldrios wrote. “Twice with each hand. NBC got Norm [McDonald] out of that desk for way less. Times are changing, I guess? This whole white supremacy thing is very retro.”

In a now deleted tweet, one verified user, who has since made their profile private, wished for Musk’s death over the incident.

“Definitely never thought Saturday Night Live would send me into a tornado of existential despair. But here we are,” a Twitter user said. “I almost don’t have words but I will say I hope his Tesla catches on fire and he dies.”

Many pushed back on the allegations, arguing that there was no evidence that Musk’s gesture was intended to be anything other than innocuous.

“Not a huge Elon Musk fan but if you’re inferring this to mean he was flashing the ‘white power’ sign, you might need to go to therapy.”

Neither Musk or SNL have commented on the allegations and the moment has been largely overshadowed by other segments from the show.

Musk is just the latest person to be accused of making hateful gestures in recent weeks. Jeopardy! contestant Kelly Donohue was likewise accused of being a white supremacist after using the gesture on the show last month.

The allegations were later debunked by Snopes, who noted that Donohue was actually referring to the number “3” after his third win on the show. Donohue, who later condemned white supremacy in a post on Facebook, had previously shown two fingers and one finger during his prior wins.