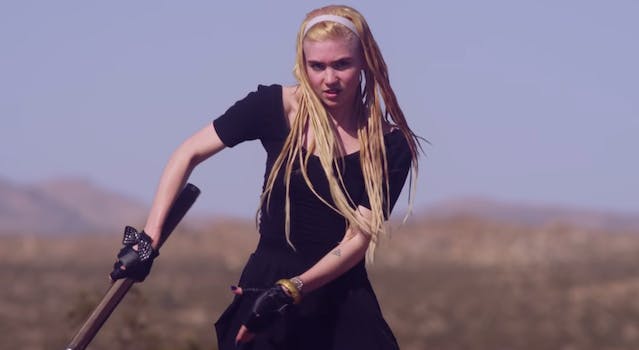 By now, we all know that 31-year-old Canadian musician Grimes (aka Claire Boucher) makes unconventional choices. She recently announced that she plans to “kill off” Grimes and go by c, to represent the speed of light. She famously has held an on-again-off-again relationship with billionaire Elon Musk. And now, in an Instagram post using a photo of a recent Adidas campaign that she appears in, Grimes claims to follow an insane “training regimen” that includes an eye surgery to help cure her depression.

I know what you’re thinking: this is a joke, right?

Horrifyingly, it turns out that at least some of her post is true, with this tweet from her sword trainer making us wonder if other aspects of her “regimen” might be real as well.

I thought it was a joke and then… pic.twitter.com/BXGUkam2SM

The biggest question everyone has is whether the eye surgery Grimes mention in her post (see below) is real or not.

I have also eliminated all blue light from my vision through an experimental surgery that removes the top film of my eyeball and replaces it with an orange ultra-flex polymer that my friend and I made in the lab this past winter as a means to cure seasonal depression.

A lot of people thought it was a joke.

If anything, Grimes' dystopic workout regime and nonsensical biopunk eyeball surgery makes me respect her *more.*

Hoping Grimes "experimental eye surgery to cure seasonal depression" is some form of satire but at this point… who knows pic.twitter.com/JSZIW8hlyr

However, articles reporting on the subject seem to have taken at least a neutral stand on it, acknowledging that the post might be satire but carefully phrasing the commentary on her eyeballs so as not to pass judgment either way. Even Rolling Stone leaves room for doubt with their line about it sounding fake unless you believe she’s performing Frankenstein-like experiments on herself, with the slight implication that she could be.

A tweet from Dr. Glaucomflecken, who identifies himself as both an ophthalmologist and a comedian, further confused users. “The orange ultra flex polymer costs 8 million dollars and is excruciatingly painful to install,” he wrote.

When asked for comment by the Daily Dot, however, he said: “It is not real. What she said is ridiculous and I have to assume the whole thing was a joke.” To be fair, while his initial tweet may have missed the mark as obvious parody, this later one should have tipped people off.

And if anyone was still left confused, this one definitely should have cleared things up.

There's a part in the hippocratic oath that clearly states if an artist brings you a homemade medical device, you have to surgically implant it anywhere they want. I had no choice.

His followers definitely ran with it.

Yes, yet..Hear me out! What if Grimes is on to something? We absolutely need more information, BUT: As climate change extends winter in many places, shouldn't we look into this? Are SAD sufferers expected to wear googles for 6 months or get fired for all the rescheduling? pic.twitter.com/9yK1ZBCP46

Need to keep the humidity up or her eyelids would stick to the polymer like someone wearing shorts on a leather chair.

Alarmingly, some people are still considering the post’s viability.

Yes, yet..Hear me out! What if Grimes is on to something? We absolutely need more information, BUT: As climate change extends winter in many places, shouldn't we look into this? Are SAD sufferers expected to wear googles for 6 months or get fired for all the rescheduling? pic.twitter.com/9yK1ZBCP46

Honestly, though, the internet doesn’t care whether it’s true or not. Grimes gave them a choice opportunity and they’re going to follow through on that.

Trust me, it doesn’t work.

Grimes claims she removed part of her eyeball to 'cure seasonal depression' https://t.co/0prbozghyq

Adidas rep: so what do you do to stay fit?

Grimes: I float around different dimensions using a tank like that skin head girl in stranger things, attack a guy with a sword for like an hour and I had part of my eyes surgically removed. Positive vibes ✌️ https://t.co/unx447EdDD

I just realized grimes getting eye surgery to remove blue light is basically the rich version of, “maybe if you weren’t on your phone so much”

In the end, user Nick Pettigrew left us asking the important questions.

It's all very well Grimes having eye surgery to block out blue light but this does leave her susceptible to having her house burgled by Smurfs.