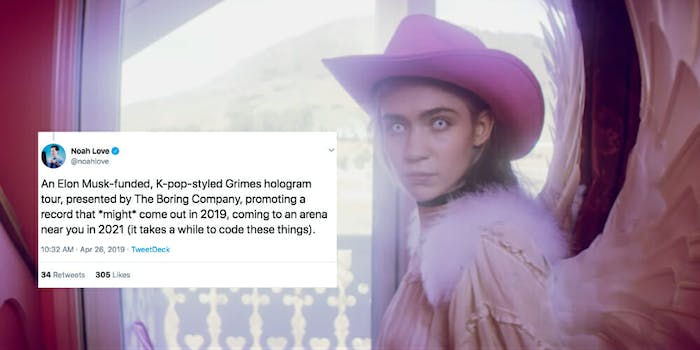 Grimes says she wants to do a hologram tour, and Twitter is not feeling it

Musician (and girlfriend of Elon Musk) Grimes no longer wants to make albums or perform live–she instead wants to do a hologram tour. And Twitter is less than thrilled about the prospect.

“I wanna retire from touring. I wanna do a hologram tour,” Grimes recently told Flaunt.

Hologram tours are usually reserved for artists who no longer can perform live–often because they are dead. Notably, a hologram of Tupac Shakur performed at Coachella, alongside real-life Snoop Dogg and Dr. Dre, in 2012. A hologram of Michael Jackson also performed at the 2014 Billboard Music Awards.

So this is understandably confusing, as Grimes is very much alive.

“She not dead yet tho?” one Twitter user questioned.

She not dead yet tho?

Others just found the idea ridiculous.

not a single soul:

grimes: i want to go on a hologram tour

Of course, Twitter had plenty of jokes about the whole thing.

An Elon Musk-funded, K-pop-styled Grimes hologram tour, presented by The Boring Company, promoting a record that *might* come out in 2019, coming to an arena near you in 2021 (it takes a while to code these things).

I would also like to show up to work as a hologram.

Grimes says she wants to do a tour as a hologram https://t.co/7x1NUyOiuL

Grimes alluded to stage fright as the reason for wanting to do a hologram tour.

“Why do we keep doing them for dead artists instead of living ones who have stage fright?” she asked.

Grimes then opened up about her stage fright, and what it feels like.

“It’s nightmarish. Apocalyptic. Terrifying, horrible. I can’t hear clapping or cheers–I just hear an echo chamber of death. I black out,” Grimes said. “I’m not a good performer,” she said. “I’m a director who accidentally fell into this position, and now it’s too late to change.”

I wouldn’t even be mad if grimes did a hologram tour. I’d bop regardless. pic.twitter.com/WkUaeiESpa

Grimes’ desire to do a hologram tour should come as no surprise—she’s previously discussed her interest in science and technology. After all, her and Elon Musk’s relationship infamously began after a joke about artificial intelligence.