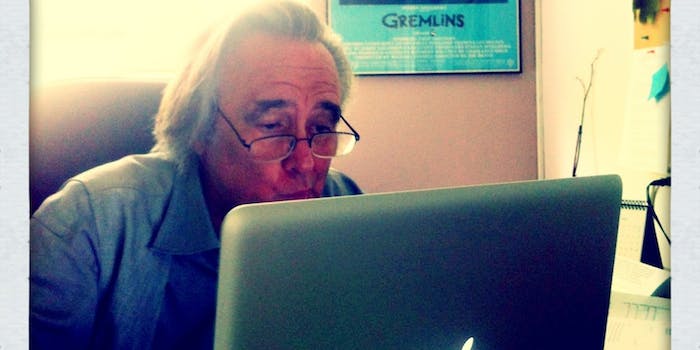 CAPTCHA inventor Luis von Ahn, Slashdot founder Rob "CmdrTaco" Malda, and one of the co-creators of popular webcomic Cyanide and Happiness also made the list.

This week, some of the Internet’s behind-the-scenes inventors stopped by for a chat at Reddit’s r/IAmA.

Luis von Ahn, who created the CAPTCHA system that websites use to tell spam from real people, came to talk about the future of bots. A guy who created an successful AMA about traveling the country last year came back for a long-promised update. The creator of Slashdot, which in some ways is an ancestor to Reddit, talked about that site’s heyday. And a co-creator of Cyanide & Happiness, one of the most established cartoons on the Web, waxed nostalgic about his native Ireland.

The biggest story of the week, though, was, as is often the case, someone responsible for a beloved cult film. Gremlins and Gremlins 2 director Joe Dante gave Reddit some trivia on the movies, like the song Gizmo whistles, and complained about Hollywood’s push to remake recent films. What if Gremlins was remade today?

“I’d certainly lean toward puppets because there’s nothing like having the monsters on the set with the actors, but I’d be foolish to say I’d reject all CGI, because there’s a place for it,” he wrote. “I’m sure there have been major advances in puppeteering since 1990!”

1) I am the director of GREMLINS, Joe Dante. AMA.

How much for the original Gizmo puppet? (theroymccoy)

I’m afraid the original Gizmo puppet is moulting away in the Old Puppets Home.


2) IAmA scientist and startup CEO named Luis von Ahn. I developed CAPTCHA and reCAPTCHA, those squiggly characters you see all over the web (sorry!). I’m now working on Duolingo, a new way to learn languages while helping to translate the Web. AMA.

Didn’t Google buy reCAPTCHA from you? Why haven’t they implemented it in their confirmation process already? (compilingpenguin)

I guess it takes time to migrate big systems in large companies. Have you seen Office Space?

What was going through your head when you charged into that Flaming building? (Harrison_bergeron727)

“Please Lord get me and my neighbor out of here alive” . . . . other brilliant things that probably flashed through my big bald head: “Fire – hot”; “can’t believe I’m so out of shape climbing a flight of stairs”; And “I wish I was faster.”


4) IAmA Olympic Weightlifter and The Strongest Woman in America

Your AMA announcement in the sidebar linked to this article [Titled “The Strongest Woman in America Lives in Poverty”]. Do you agree with the title and general sentiment that the article tries to portray? (cole925)

When I was interviewed for this article, we talked for a long time about many things. I had no idea what angle she was going to take. I was living off of $400 a month. I was collecting food stamps. I struggled a lot during that time. I asked several companies to sponsor me. I didn’t even ask for money. Just a few products that I used. I got some donations to tide me over through the Olympic Trials. I struggled at home and on the platform. To be MY best, I had to focus solely on training. I do feel as if the funding situation in our organization is unfair. I do feel as if my size/appearance could be a contributing factor in lack of sponsorships. Especially with supplement and apparel companies. Generally, I agree with the sentiment of the article.


5) I quit my job, broke up with my long-time girlfriend, and then traveled the US by train for two months alone, staying only with random people I met off the internet days in advance. I made an AMA about it exactly a year ago today – and in it – I made you all a promise. I’m back. AMA!

How was it when you. came back? (Mogar)

Coming back was surreal. Time seemed to speed up (on the trip a month seemed like a half a year), and nothing meant anything to me anymore. My bed, computer, clothes… none of it meant anything. It was … a weird feeling.


6) I am Dave. I’m from Ireland, and I’m of the writers of Cyanide & Happiness, arguably the largest webcomic online. Time for a personal AMA.

Being a very popular web comic, your comics can be found all over the Internet. Considering the value of your art/writing, does this bother you? Has C&H experienced any legal tension over intellectual copyright? (soFuckingRad)

Occasionally. We’ve had trouble with sites like FunnyJunk before, and had to ask them to take them down. We don’t mind people sharing our stuff as long as it at least has an URL to our site on it. ie. our watermark, which some people even take off.

I agree with your approach — your contributions to the community would in turn reinforce good behaviour and interesting stories. Although here at Reddit it would just turn into an infinite recursion of cat pictures.

Do you feel that Slashdot, being owned by a software development company and being niche focused, undermined its early lead in this space? (dbcanuck)

I was always afraid that broadening Slashdot to wide subject matter (which is something that Reddit does fairly effectively) would dilute its core. Maybe I was wrong to play so conservatively, but I didn’t want to change what was a very quirky community that had been ‘News for Nerds’ for years already.