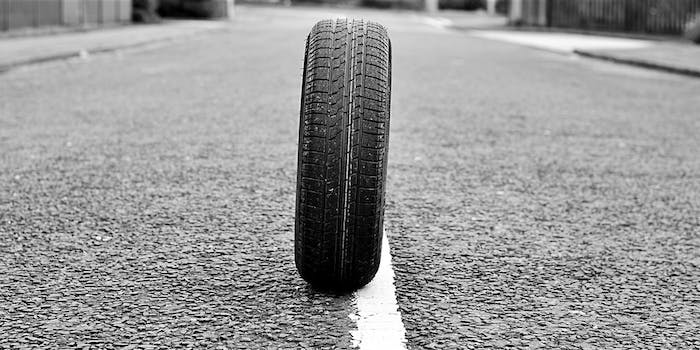 The wheels on the car go round and round until you lose track of everything.

GoPro cameras have long been able to give us a first-hand look at places we’d have never seen otherwise, but one of the latest videos shot with a GoPro is a strangely hypnotizing experience.

For a University of Wisconsin—Milwaukee Video Sketchbook summer course, Ryan Fox stuck a GoPro onto a car tire just using duct tape. After he tested it on slower roads without it falling off, he decided to take it into the city.

Going upwards of 45 mph, you almost forget you’re even watching a spinning tire rotate because it feels like it’s a clip straight out of a science fiction movie. It’s an action shot that could perfectly fit in 2001: A Space Odyssey or some attempt to hypnotize the protagonist. It could even be used in racing movies just to show how quickly those cars are going or even that horror comedy involving a tire with telepathic powers.

If that’s what it’s like on a city street, just imagine how much faster it’d go on a highway.